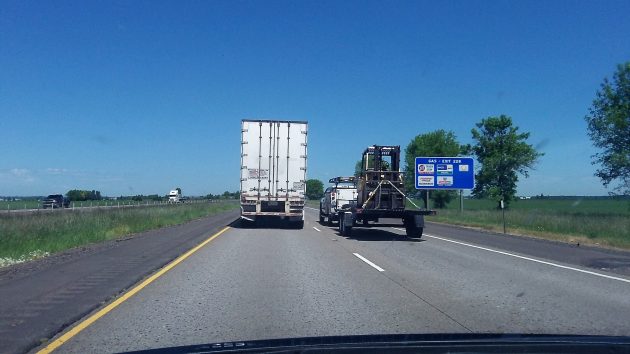 The proposed left-lane law would not affect this situation. But look at the blue sky in this shot from the files!

On a slow day you can always amuse yourself by browsing what the Oregon legislature is up to. Take, for instance, the left-lane bill that cleared a Senate committee last Wednesday by a vote of 4 to zip.

The bill is SB 532, and it’s a favorite of Democrat Ginny Burdick of Portland, who introduced it before and did so again this year. Like many people, she is sick of drivers on I-5 hogging the left lane and not letting her pass.

Her bill, which was cosponsored by Albany Republican Rep. Andy Olson, among others, requires drivers to use the right-hand lane on multi-lane roads where the speed limit is 55 mph or greater. Exceptions are made for passing and other things, such as congestion, road conditions and making way for traffic entering the highway.

“Failing to yield the left-hand lane is a common source of frustration for drivers,” Burdick told the Senate Business and Transportation Committee in her written testimony. “We have all witnessed the traffic bottleneck created by one slow-moving vehicle remaining in the left-hand lane, even after all passing has been completed… This bill will give the Oregon State Police clear authority to ticket drivers who refuse to move to the right after passing has been completed. Senate Bill 532 compels Oregon drivers to use our highway system in a safer, more efficient way.”

Maybe, and maybe not.

If the bill passes and people become aware of it, if anything there might be more needless back and forth between lanes. There’s not likely to be any enforcement. If a trooper gets behind a left-lane hog to document the offense, the driver in front is going to get out of the way right quick. So then, where is the offense?

Captain Bill Fugate of the state police said as much when he testified for the bill. “I made two trips to Portland from Salem last week in my police vehicle,” he said in written testimony. “As I drove I encountered these left-lane campers who were obviously not sharing the road. Time and again as I came up behind these drivers in my police vehicle, they moved over.”

Hogging the left lane is a Class B traffic violation already if it’s done by drivers of campers, vehicles with trailers, or vehicles weighing more than 10,000 pounds. The maximum fine is a thousand bucks. That’s pretty stiff, and the bill would apply the same law to all drivers. Do we really need another law that fecklessly addresses a relatively minor problem but threatens people with potentially stiff fines? (hh)