Bikeway update: The word is soon 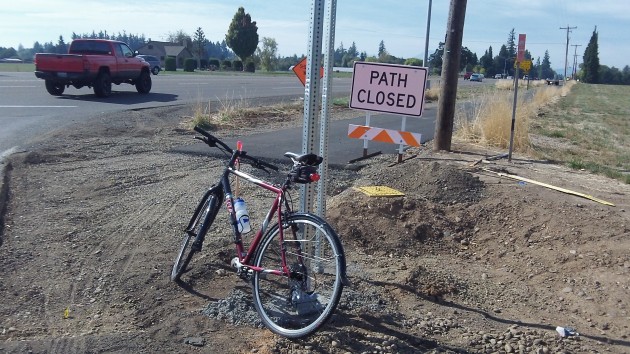 Highway 34 at Riverside Drive, where the new bikeway starts.

On Thursday I rode down Riverside Drive to check on progress on the bikeway being built along Highway 34. I was hoping it might be finished early, ahead of the Oct. 31 deadline. No such luck. But the wait won’t be too long.

The two gaps in the asphalt that I saw in September are still unpaved. And on the steel bridge across Owl Creek, ODOT says the concrete deck has been poured but needs a couple of weeks to cure.

Looking at the project Thursday, I got a better appreciation of the reasons for $1.1 million expense. Just west of Colorado Lake Drive, the bikeway has to cross the Owl Creek floodway before it spans the creek itself on its way west. On the downstream side of the path, the contractor has built a massive retaining wall, anchored with pilings every few feet. The whole thing looks strong enough to withstand a nuclear blast. I think we can be confident that the path won’t slide away even in a catastrophic 500-year flood. 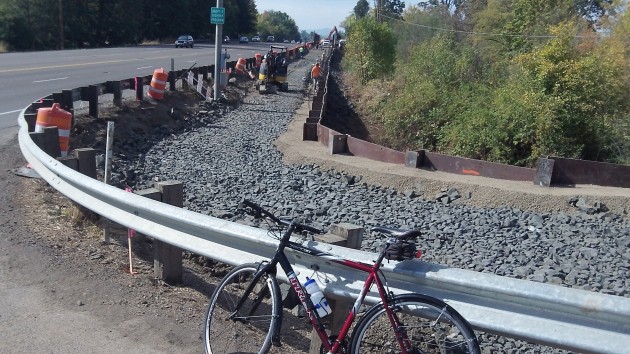 As I was admiring this part of the project, a guy in a hard hat walked up. Before he got into an ODOT pickup, I asked him when the bikeway might be finished. He said it should be paved and open for use in two to three weeks.

The new part of the path goes from Riverside Drive to Wolcott Road, where it picks up an existing bikeway for the rest of the way to downtown Corvallis. As I mentioned the last time (Sept. 11), Linn County plans to follow through on widening the shoulders, where necessary, along 5.8 miles of Riverside Drive. When that is done, we’ll have an Albany-Corvallis route bike riders can use without risking their lives. (hh)

The original story has been edited to clarify a couple of points regarding the construction. (hh) 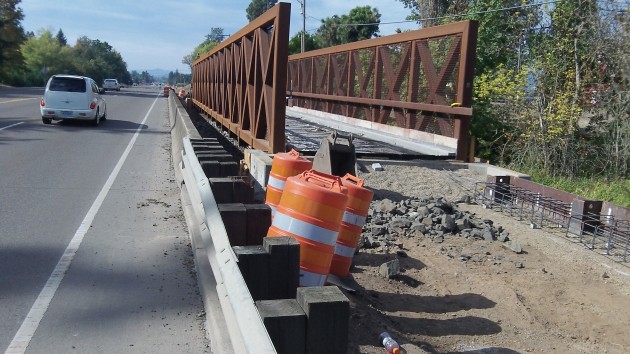 The bridge deck, of concrete, has been poured and is curing, ODOT says.


4 responses to “Bikeway update: The word is soon”