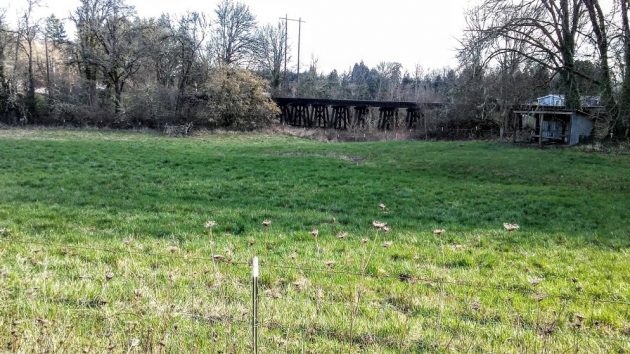 As seen from West Thornton Lake Drive this afternoon, this is where the bikeway would cross under the Union Pacific trestle.

This is supposed to be the year ODOT builds the Albany segment of the long-proposed Albany-Corvallis bikeway. But the project has hit another snag: It requires the trail to cross under a railroad trestle, and the railroad has said no.

The rail line is owned by the Union Pacific and leased by the Portland & Western. As planned by Benton County and the city of Albany, the bikeway would run west from Hickory Street in North Albany, on the south side of the track, cross to the north side under the trestle off the end of Rainwater Lane, and then run along West Thornton Lake Drive to Scenic Drive.

The 1.7-mile trail would allow cyclists to avoid the narrow shoulders in the curves of Highway 20.

According to ODOT’s Statewide Transportation Improvement Plan, this section of the bikeway is on the 2020 schedule for construction at an estimated cost of about $1.4 million. Engineering and the acquisition of right of way were scheduled from 2016 through 2019 at a combined cost of about $1 million, bringing the total estimated cost to $2,447,048.

In response to a request for an update on the project, Benton County Engineer Laurel Byer said by email: “It is true that the North Albany section is temporarily on hold as we resolve issues with the railroad.”

Public Works Director Gary Stockhoff didn’t say whether the objection comes from the UP, the PNWR , or both. He did provide other details. The railroad, he said, rejected the plans because the undercrossing could cause potential conflicts in its right of way, would be in a floodway, and could present maintenance problems.

“Currently we are working with ODOT to set up a meeting with the railroad reviewer who rejected the plans,” Stockhoff wrote in an email Monday. “The hope is that we can talk them through their concerns and get the permit we need to complete the undercrossing.”

Meanwhile, at the Corvallis end of the bikeway, Byer reports that the county is coordinating with ODOT on a section along Highway 20 between Conifer and Merloy. David Evans and Associates has been selected as a consultant. The idea is that design and right of way acquisition can occur in parallel with safety projects ODOT is planning for Highway 20.

When this bikeway was first proposed about 10 or more years ago, it sounded like a great idea that would encourage both recreational riding and “active transportation” between Albany and Corvallis. Now you have to be on the south side of middle age in order to have a realistic chance of ever riding on that completed path. (hh)