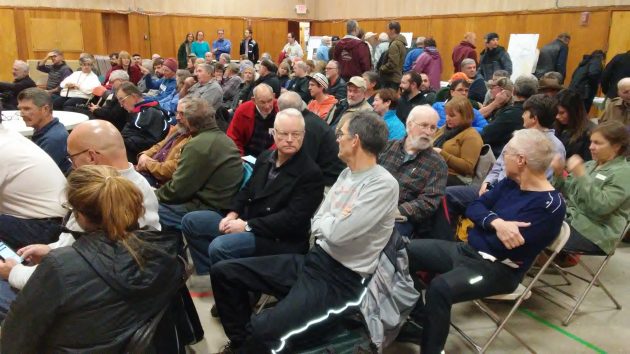 Benton County is serious about wanting public comments on the idea of an Albany-Corvallis Bikeway. That much was clear from what was said and how many showed up at a public forum at the Waldorf School in Corvallis Tuesday.

The previous plan for this long-discussed eight-mile path — to run it alongside the Portland & Western rail line — died in February 2015. The county planning commission shot it down after farmers objected that it would hamper their operations.

The rail line option is off the table now, and the county commissioners have to decide whether to keep the concept alive by trying another route. Public Works Director Josh Wheeler told the crowd of close to 100 that the county has no interest in routing the pathway where it would conflict with neighbors.

The county last year commissioned a survey that showed the bikeway had considerable public support and would be used mainly for recreation and to a much smaller extent for commuting. Consultants since then talked to “stakeholders” about potential routes. Tuesday’s forum was the last item in phase 1 of what may be a three-phase planning process. Whether the county goes to phase 2 is to be decided when the three-member board of commissioners meets on Tuesday (Dec. 20).

The map showed one theoretical alternative along the winding left bank of the Willamette River. I heard several people dismiss it as unfeasible because it would cross wetlands and farmland, require bridges, and would be unusable in winter as the river comes up.

Among the seemingly most practical alternatives were either bike lanes on Highway 20 itself or a separate path paralleling the highway. Wheeler, though, stressed that the choice of a route was still wide open, and the audience was invited to suggest other possibilities on maps that were provided.

Determining whether there’s a viable route will happen in Phase 2 if the commissioners go ahead and direct consultants to keep working. In order to be studied further, a route would have to meet criteria such as compatibility with surrounding land uses, and feasibility in terms of engineering and cost. It would also have to be environmentally acceptable, help reduce congestion, and be safe for users and neighbors. Wheeler cautioned that it’s entirely possible no feasible route will be identified.

Dozens of participants filled out comment cards. I read a few of them. Why a second path, one of them asked, when ODOT had already built one along Highway 34 to Riverside Drive? Another said the writer would like a direct path to Albany so she could bike to and from the Amtrak station. A third said climate change should be part of the consideration.

If phase 2 of the planning takes place and a preferred route emerges, which would happen by next spring, it will be subjected to an engineering analysis in phase 3. After that, if it goes that far, the long process of securing financing would begin. Looking around the room and at myself, I got the feeling that even if the commissioners give the final green light in 2017, some of us in the audience may not live to ride on that path. (hh) 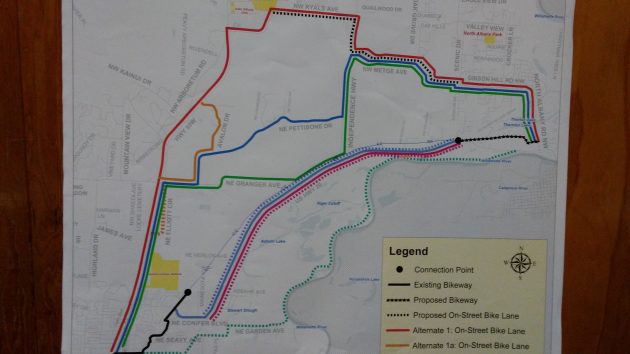 These are some of the alternatives, including a route along the Willamette River. 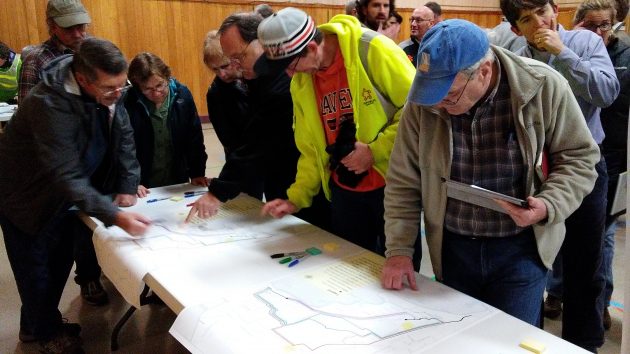 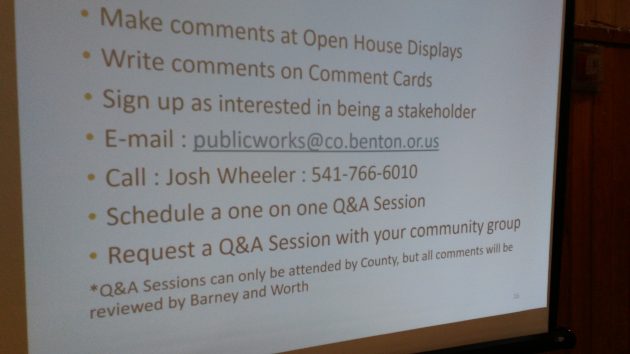 The many ways the public can take part in the bikeway planning.