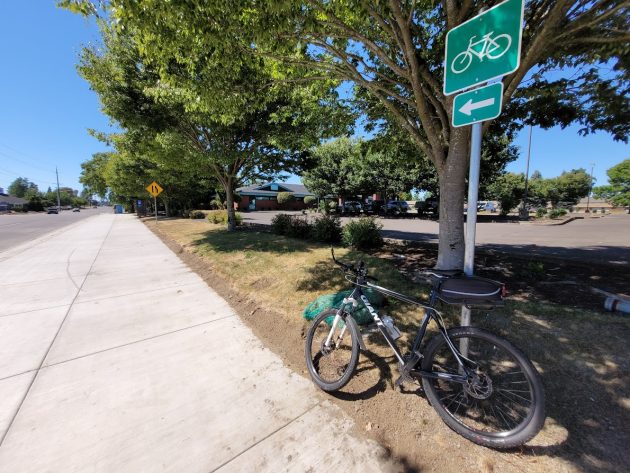 The bikeway is that-a-way. This new sign points west to where the Periwinkle Bikepath resumes.

Problems with the delivery of concrete mix evidently were resolved so that the extension of the Periwinkle Bikepath along Queen Avenue in Albany could be completed.

I noticed earlier in the week that the concrete paving of this 13-foot-wide multi-use pathway no longer had a big gap, and by Sunday afternoon much of the rest of the work was finished as well, prompting me to say:

About the only thing left to do, as far as I could see, was the installation of a new pole to hold the pedestrian crossing buttons and signals at the intersection of Queen Avenue and Geary Street.

So now people on bikes traveling south can turn left on the new path, ride to the intersection 300 feet away, and use the pedestrian signals to cross to where the path continues on the other side. (It continues to the southeast on its way to Grand Prairie Park.)

This was billed as a multi-use pathway under ODOT’s “safe routes to school” program. The extra-wide sidewalk is intended for both pedestrians and people on bikes or, presumably, electric boards or scooters.

With multiple types of users going vastly different speeds in mind, it wouldn’t hurt to paint a stripe down the middle of this two-way path. After all, it’s supposed to be a route that’s safe. (hh)

5 responses to “Bikeway extension on Queen now is complete”