Bikeway along Hwy. 20: The latest 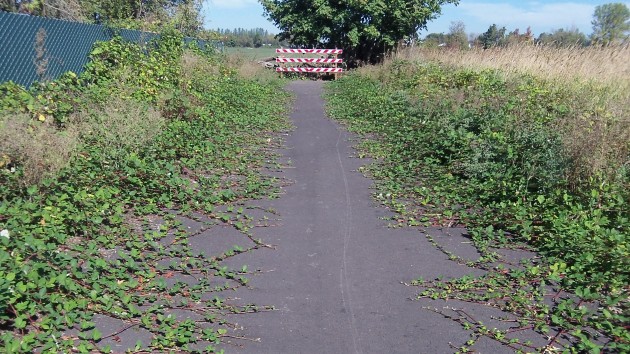 This Corvallis stub of the Albany-Corvallis bikeway is likely to remain a dead end forever.

Before putting much more work into any possible bikeway between Corvallis and North Albany along the Highway 20 corridor, Benton County is going to try to find out how many people might actually want to use such a route.

On Thursday the county announced it had contracted with David Evans and Associates, a firm that specializes in traffic issues, for $22,459 to do a two-phase sampling of opinion in Albany and Corvallis. One part is a telephone survey scheduled for Nov. 19-23. The other is a chance for people to give their opinion online, tentatively scheduled between Nov. 23 and Dec. 7.

“Once that work is complete and the results tallied and analyzed,” the board of commissioners said in a statement, “the county will consider beginning the public process relative to possible routes for the pathway. If the county moves forward, that process likely would begin next fall.”

Note the tentative tenor of those comments, which suggest that the likelihood of the path being built has become even more remote since last February, when the Benton County Planning Commission killed a plan to route the path across farm land along the rail line between Albany and Corvallis.

“We learned from conversation with one landowner and one bike advocate that people would be interested in a public process to determine a possible location,” Public Works Director Josh Wheeler told me by email. “They would not support the path if there was no scientific evidence that the path would be used and have a reasonable cost benefit.”

A public process starting next fall and lasting who knows how long to pick a route, but only if there’s “scientific” evidence of future use plus a “reasonable” cost-benefit ratio — all that sounds as though most of us, of any age, are not going to live to see this path. Maybe we better try something else, such as persuading ODOT to widen the Albany-Corvallis Highway to account for modern traffic volumes and add a bikeway along its northern side. (hh)