Bike route options: How about these? 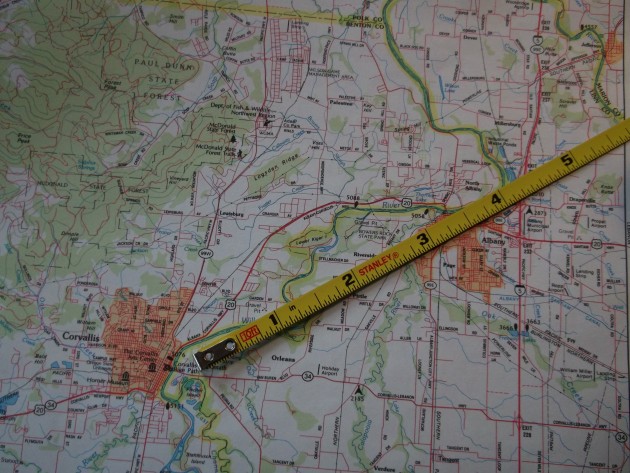 Only about 6 miles separate the outskirts of Albany and Corvallis.

Now that the latest plan for an Albany-Corvallis Bike Trail — or “multi-use path” — has been shot down, Benton County says it will try to find another route. A long look at the map suggests at least two alternatives that would be almost as good.

Benton County this week withdrew its request for $2 million in Connect Oregon funds after the county planning commission on Feb. 17 unanimously denied a conditional use permit to route the path through farm land along the northwest side of the PNWR railroad line. Now the county plans to try again, and this time to do things right.

Its next step is to select, in March or April, a consultant with experience in this kind of project to examine route options so they can be studied. The county also will have a schedule of meetings and other forms of public “outreach.” Six to 12 months later, the county expects to have a plan with strong public support. Then it will seek funding once again.

So what about possible routes, routes that don’t interfere with other uses and don’t run into Oregon’s strong protections of exclusive-farm-use land?

One would follow the previous plan on the north side of Highway 20 from Scenic Drive near Albany across Independence Highway to the vicinity of Granger Road. From there it would follow Granger west to Lewisburg, then turn south along the east side of Highway 99W until it meets an existing bike path at Circle Boulevard. The right of way along 99w should be wide eough to accommodate a path separate from the highway, similar to the path farther north, from Monmouth to Rickreall.

The other alternative lies on the east side of the Willamette River and is already being pursued by ODOT and Linn County. ODOT is extending an off-highway path along Oregon 34 from Wolcott Street, where it now ends, to Riverside Drive. And Linn County is planning to widen Riverside all the way from Albany to Highway 34 to accommodate a safe bike lane. It’s not the same as a separate path, but it’s  better than what’s there now. Linn has started surveys and other preparations to widen the first 3 miles of this route, starting from Oakville Road, in 2016.

The Lewisburg alternative would be only slightly longer than the route along the railroad, but it would not interfere with the intensive farming along the tracks south of Granger. The Rverside option has the advantage of being more convenient for users from the Linn County portion of Albany.

On the map, another striking fact appears. The southwestern edge of Albany and the northeastern part of Corvallis are separated by only six miles. Several roads exist, little used and dead-ending at or near the Willamette. So, a narrow bike bridge across the river would solve the problem. Imagine the required permits for, objections to and astronomical expense of that! (hh)


6 responses to “Bike route options: How about these?”