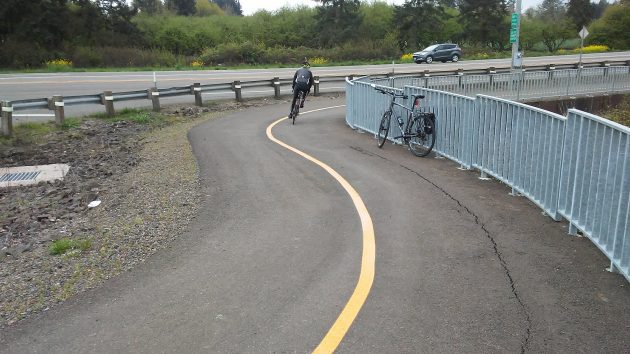 On a curve near Colorado Lake Drive, a yellow line down the middle of the Highway 34 Bikeway makes collisions less likely.

Here’s a helpful little detail Albany might want to copy on couple blind curves on the riverside Dave Clark Bike Path: A center line intended to keep cyclists and others from possibly running into each other.

I happened to notice such a line on ODOT’s Bikeway along Highway 34. The painted stripe goes down the middle of the pathway for only the extent of the curve west of Colorado Lake Drive, just in case bikes going in opposite directions meet in that stretch.

On the Albany path, there are two or three sharp corners that might benefit from the same kind of line. Allow me to explain and illustrate:

I hesitate to suggest yet another task for the short-staffed Albany parks department. But if there was a center line through those curves, inviting cyclists, skateboarders, joggers, and anyone else to stay on their side of the path, the chance of a painful collision would likely be less. (hh)


15 responses to “Bike path lines: An idea worth copying”