Bike lanes must be used, except for … 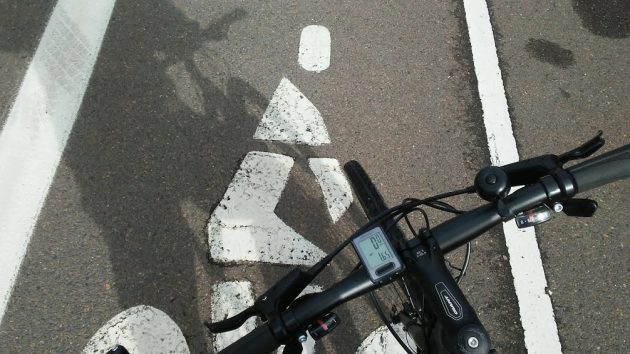 In Oregon law there’s an offense called “failure to use a bicycle lane or path.” It’s a Class D traffic violation, but there’s no practical way to enforce it. And the Albany Bicycle and Pedestrian Advisory Commission last month agreed to recommend education rather than trying to hit violators with tickets.

The advisory board discussed it at length when it met on Oct. 22. You can listen to the audio here.

The consensus was that nothing would be gained by going through the cumbersome process the law lays out in order for the requirement to be enforceable. Instead, it would likely do more good if the city made an effort to educate people on the safety benefits of cyclists properly using the available lanes.

Proper use includes riding in the right direction, a point brought home to me when I was riding on Queen Avenue a few days ago and looked up just in time to evade a wrong-way skateboarder heading my way.

The law (ORS 814.420) says cyclists are not required to ride in the bike lane “unless the state or local authority with jurisdiction over the roadway finds, after public hearing, that the bicycle lane or bicycle path is suitable for safe bicycle use at reasonable rates of speed.”

Albany has about 50 miles of bike lanes, and the city council would have to hold hearings on each one, perhaps block by block, in order to enable the police to ticket any cyclist they happen to see outside that lane.

Even then, the law also says there is no violation if a cyclist rides outside the lane in order to pass someone, prepare to make a turn, avoid debris or other hazards, or go through an intersection. Considering the amount of broken glass and other debris on many bike lanes, it would be tough to make the requirement stick even if the council authorized that it be done.

In any case, cyclists use bike lanes whenever possible without being forced. Without those lanes on Pacific, Santiam, Waverly, Geary, Queen and other major roads, riding a bike through Albany would be far more risky than it is. (hh)


8 responses to “Bike lanes must be used, except for …”