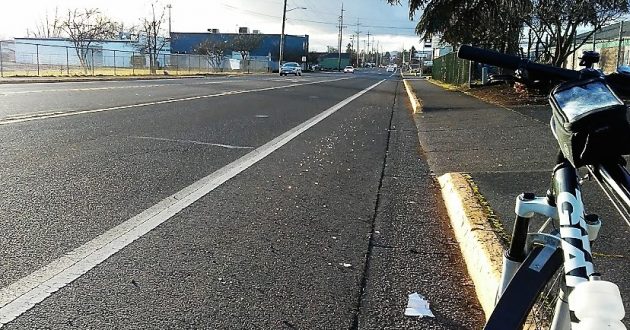 That glitter in the bike lane on Queen Avenue Saturday was splinters of glass.

Riding the bike along some of Albany’s thoroughfares Saturday, what I wondered about was this: Where is all that splintered glass coming from?

Along segments of Queen Avenue, Waverly Drive, 34th Avenue and Geary Street, broken glass was a common sight. I was grateful that none of it caused me a flat. But I wondered why there was so much of it and where it all was from.

Surely there could not have been that many automobile collisions in the straight stretches of those streets since the last time the streets were swept. I thought that maybe what I was seeing was the result of glass bottles being tossed from cars. Maybe some of it was, but most of it did not really look like bottle glass. Not thick enough.

When you google “glass in bike lanes,” you come across a couple of entries from Folsom, Calif., where people had used an app called “SeeClickFix” to call the city’s attention to that very thing. You also find an entry from Portland, where someone had used an Oregonian/OregonLive feature to report a glass outbreak that caused at least three bike commuters to sustain flats at the same time.

Bike lanes are very useful to everybody in traffic, preserving life and limb of cyclists and saving drivers from the costly ramifications of accidentally running somebody down. But when the danger of flats is significantly enhanced by sharp debris, the lanes’ utility obviously declines.

So, could we just stop throwing glass from cars, and if we have an accident that leaves debris behind, how about sweeping up? (hh)