In the last story on this subject a couple days ago, we went for a short video ride on Madison Street, where the city of Albany is planning a project to enhance bike safety. Here’s a slightly longer ride along all eight blocks of Madison from Pacific Boulevard to Water Avenue.

This took place on Sunday afternoon. You’ll notice that there’s hardly any traffic, which is typical for Sundays.

You can read more about the background of this bike boulevard idea in the previous story. The planned safety project was prompted by a number of bike-car crashes along that street, the city says.

With traffic relatively light even on weekdays, it’s hard for me to see what would explain an unusual number of crashes. About the only tricky place for people on bikes is where Madison crosses Second Avenue. The elevated railroad track a block to the west limits your vision of oncoming traffic until it comes flying over the Second Avenue hump.

This week the city’s bike and pedestrian advisory commission is supposed to discuss whether to combine the safety enhancements with the more elaborate steps that would be needed for a regular bike boulevard.

Depending on what they advise, the city council may have to get involved. In any case, you can count on a follow-up here when and if there’s something to follow up. (hh) 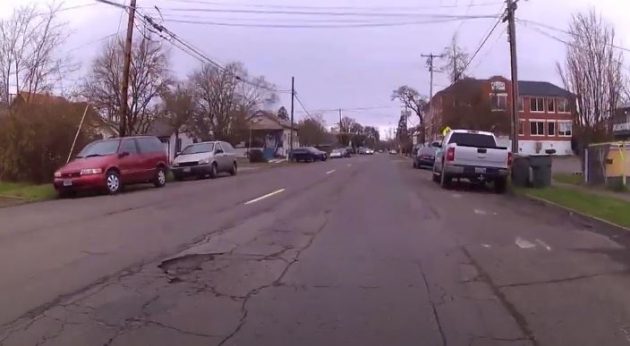 On Madison Street Sunday afternoon: Not much traffic.