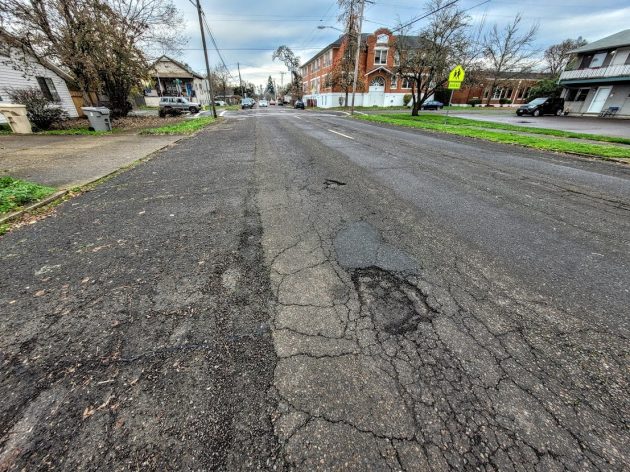 Looking north on Madison Street on the afternoon of Nov. 18.

If you have been losing sleep over the idea of a “bike boulevard” on Albany’s Madison Street between Second Avenue and Pacific, you can rest easy. The idea has stalled because of an apparent lack of interest by residents and property owners along the street.

This came up during last month’s meeting of the city’s Bicycle and Pedestrian Advisory Commission, which I just caught up with by listening to the audio recording available here.

One of them is Madison Avenue from Pacific north toward the riverfront. ODOT is paying for a “safety upgrade” on the street, where the city said there had been five bike-car crashes over five years. In April 2021 the city council accepted an ODOT grant of about $146,000 for that project, which is supposed to include green-painted sections of pavement at the Fourth and Fifth Avenue intersections. Construction is supposed to take place in 2022.

As part of that project, the city staff had proposed — and the council had agreed — to add some additional traffic-calming features to turn the street into a so-called “bike boulevard,” but only if people along the street wanted it done.

Irish told the bike-ped board on Oct. 26 that he had sent letters to about 40 residents and property owners. This produced only four responses, and only one favoring the idea. As a result, he said, the city engineer decided to skip the boulevard treatment and go with only the ODOT-funded work.

The city’s Transportation Systems Plan includes money for seven or eight bike boulevards, but none has been built. The way this has been explained is that the city is waiting for people along one of the designated streets to express a desire for one, and no one has.

It’s not exactly clear what treatments would constitute a bike boulevard. The details would be designed once a street is picked for such a project. The idea would be for motor traffic to be slowed enough that biking becomes more inviting.

Madison had been proposed because it’s a straight shot from the highway (Pacific Boulevard) toward the riverfront. But there’s not much bike traffic there as far as I’ve been able to see.

And as for slowing traffic down, the potholed and patched pavement already does that job. (hh)


7 responses to “‘Bike boulevard’ idea stalls for lack of interest”