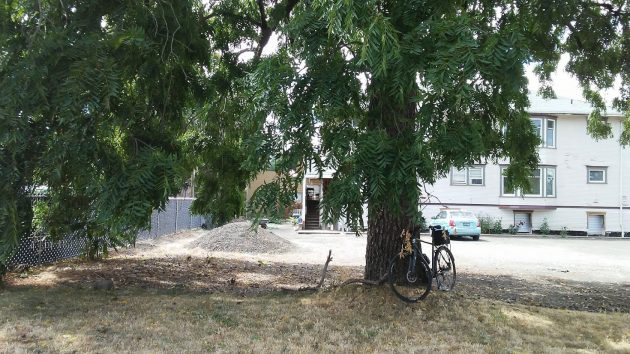 Hard to get this whole walnut tree into one frame. It’s too tall and broad. (Photo taken 8-6-21)

Wanting to save a big old walnut tree was the main reason the Albany Planning Commission turned down a site plan for eight townhouses on July 19. On Aug. 2 the commission rescinded that decision and scheduled a new hearing for Sept. 13, but the tree issue is still there.

Scott Lepman, the owner of six tiny tax lots at 224-234 Third Ave. S.E., hopes to consolidate the lots into one 7,500-square-foot property and build eight townhouses, four with garages facing Third and the other four facing an alley in back. (No alley is visible there now, but it exists on the map of tax lots — pretty much to the left of the fence you see in the photo above.)

After the July 19 denial, the planning staff discovered that tree felling was not a relevant criterion in the review of this site plan. Section 9.204 of the Albany Development Code, titled “Applicability,” says: “Site plan approval is required for the felling of 5 or more trees larger than 25 inches in circumference (approximately 8 inches in diameter) on a lot or property in contiguous single ownership in excess of 20,000 square feet in any zone.”

Here there is one tree and the property at issue is much smaller than 20,000 square feet. So, the planning staff said, the tree was not relevant. And that’s why the commission canceled its earlier vote and scheduled a new one.

But this was an application for approval of a site plan for dwellings, not for “felling or 5 or more trees.” And you’d think that the review of a site plan includes all its effects on the site, including the proposed disappearance of one example of what the development code calls trees of significant size that “represent a visual and aesthetic resource to the community.” So you can understand why three commission members originally voted to protect such a resource. And why they might again.

There’s another issue: Exactly where is that tree?

Only a surveyor can answer that with any authority. But here’s a section of the 2019 aerial photo the city’s InfoHub map superimposes on tax lot boundaries. 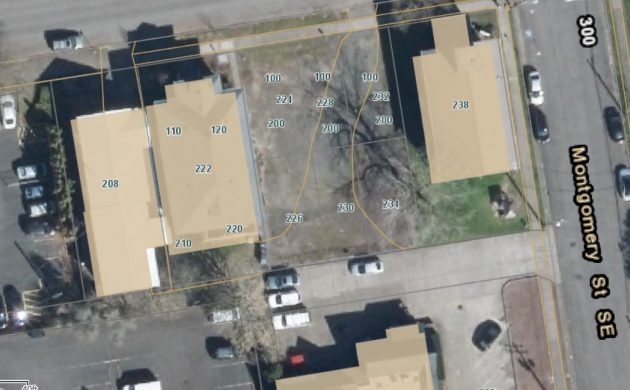 It was taken on a winter morning with the sun shining from the southeast, and all you can make out is the shadow of this tree and its limbs. And where exactly does the shadow of the trunk start? Is the trunk on the subject property? Or on the lot to the east, home to the historic church building that until recently was the office of the CHANCE nonprofit?

Or is it right on the property line? Which property owner gets to decide whether to cut  it down or leave it alone?

Especially this summer, this big old tree is providing plenty of greenery and, more important, shade. People living in one of those townhouses might appreciate its canopy and shade if it’s still there in hot summers to come. (hh) 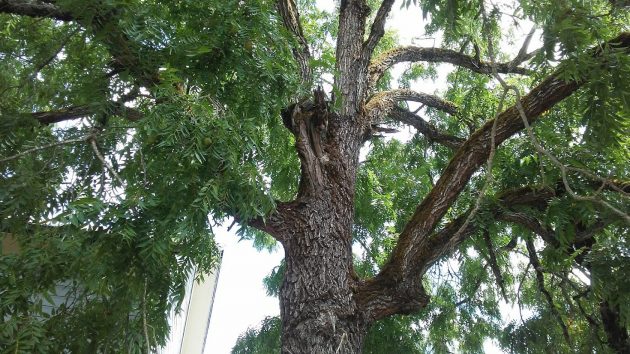 Looking up into the crown of the walnut tree a couple of days ago.


5 responses to “Big tree at issue: Taking a closer look”