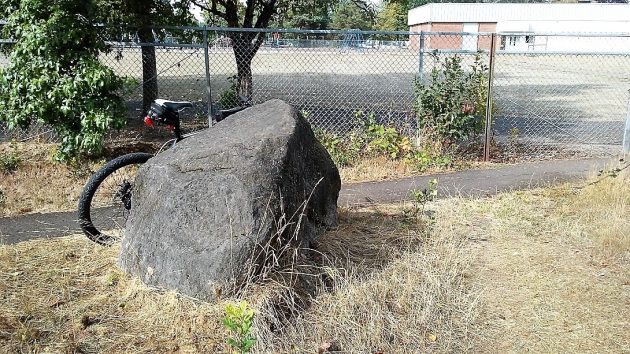 The Takena School playground is in the background of this mysterious boulder, which had a reader wondering about its origin.

Over the years, I’ve probably passed this boulder in west Albany dozens of times, but not until a reader asked me about its origin last week did I take a closer look.

The reader, Rhea Graham, wondered if this rock could possibly be one of the “glacial erratics” deposited up and down the Willamette Valley between 20,000 and 15,000 years ago during the Missoula Floods.

I can’t say for sure. But after a quick tour through various online resources, I would say it’s possible, even likely.

The Missoula Floods happened during the last Ice Age. The ice sheet coming south blocked a river in Montana, which formed a huge lake. The ice dam burst dozens of times, unleashing monstrous floods that raced down the Columbia and backfilled up the Willamette, covering the valley to a height of 400 feet above sea level. Icebergs floating on this lake carried rocks of all sizes, including very big ones, and dropped them when the waters went down and the icebergs melted.

Ira S. Allison, chairman of the geology department at Oregon State College, described all this in a paper in the 1930s. In a 1953 report published by the state (DOGAMI), Allison referred to silt deposits associated with “iceberg-rafted erratics” in the Albany area.

There’s a map, published by the U.S. Geological Survey in 2003, showing hundreds of erratics along the length and breadth of the Willamette Valley. It shows one such rock in Albany south of the river, albeit not in West Albany but on the east side of town.

From appearances alone, this boulder, at 13th Avenue and Lawnridge Street, looks like the various rocks you can find pictured if you google “Oregon glacial erratics.” If somebody knows otherwise, a comment to that effect would be welcome indeed. (hh)

This map from a 2003 USGS report shows ice-rafted erratics in the mid-valley. 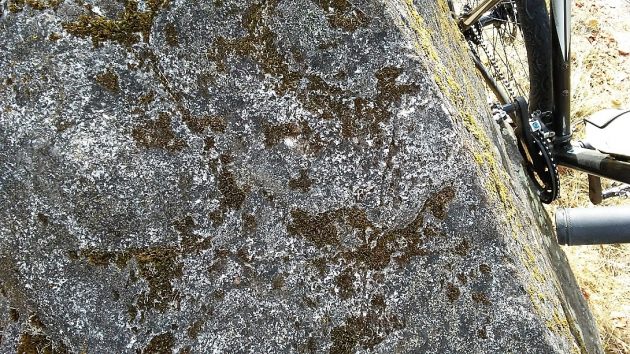 Up close, the Albany boulder shows lots of moss and also what, intriguingly, looks like inscribed lines.