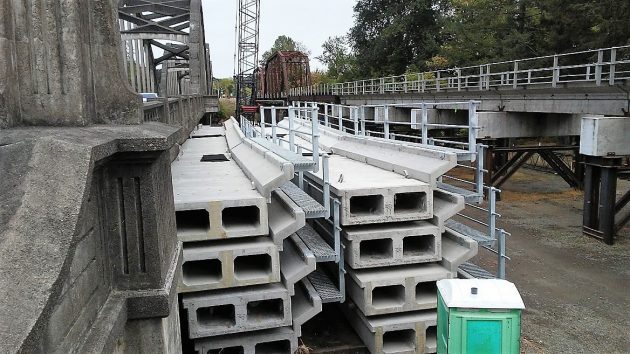 Next to the Santiam River bridge at Jefferson Sunday, pre-stressed concrete sections await installation on the UP trestle today and Tuesday.

Reader Max Hoefer saw all the construction activity at the west end of the Jefferson bridge. “What is going on?” he asked. So on Sunday the Answer Man went to take a look.

What was going on was the preparation for replacing the rest of the timber trestle to the west of the Union Pacific’s bridge across the Santiam River.

In fact, Bob Melbo told me when I asked via email, the work at the bridge was scheduled for today and Tuesday, and again on Oct. 22-23, which means that some of the Cascades passenger trains had to be stopped in favor of bus runs. But the Coast Starlight trains — southbound No. 11 and northbound No. 14 — would be able to get through.

Melbo, former Oregon superintendent of the Southern Pacific and then head of the Willamette and Pacific short line, is the state rail planner for the Oregon Department of Transportation in Salem.

“The Jefferson project is a continuation of work begun in 2015, and I believe the work scheduled for this month will complete replacement of the entire timber approach trestle west of the steel spans,” he wrote. “Some of the trestle will be replaced with steel piling and pre-stressed concrete, while the far west end will see installation of large culverts and fill material forming an embankment.”

On the line between Eugene and Portland, the UP has been completing two or three major bridge projects a year, Melbo said. This summer the railroad replaced its trestle over Muddy Creek south of Halsey with concrete and steel. Previously it replaced a ballast-deck timber bridge near what is now Love’s truck stop, and another timber trestle over Sidney Ditch between Jefferson and Marion.

After the southbound Starlight passes the Jefferson area about 4 this afternoon, construction crews expect to have about 22 hours before the northbound Amtrak train comes through on Tuesday. Sounds like a long night’s work. (hh)

Since this story appeared, I heard from Union Pacific spokesman Justin E. Jacobs in Roseville, Calif. He told me the roughly $3.5 million job of replacing segments of the trestle was being done by the UP’s own bridge crew and a local contractor. It started in June and is scheduled to be completed in mid-November.