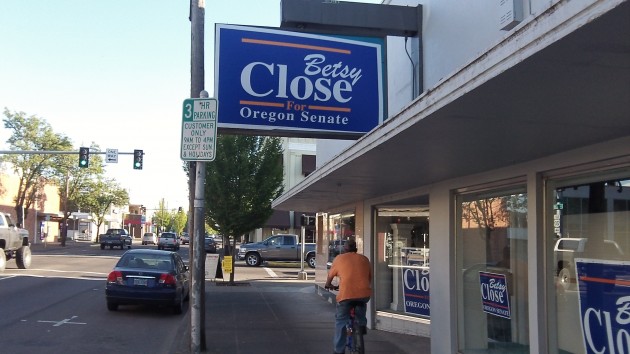 Oregon has been suffering from one-party government for years now. And if you’re a voter in Senate District 8 (Albany and Corvallis), a super-rich guy in California is counting on buying your vote in order to help cement and prolong our state’s unfortunate fate.

That’s my reaction to the news, reported by Jeff Mapes in the Oregonian on Wednesday, that California hedge-fund billionaire Tom Steyer wants to spend truckloads of cash — maybe $100 million from him and other donors — to defeat candidates opposed to the environmentalist agenda, and that a group allied with him has now targeted Sens. Betsy Close, R-Albany, and Bruce Starr, R-Hillsboro, for defeat.

As Mapes points out, Starr and Close last year both opposed a bill that would have allowed Oregon to go forward with a low-carbon fuel program. That program was aimed at lowering greenhouse gas emissions, in the vain hope that this would alter the course of global climate change. But its effect would have been to drive up the cost of living for every Oregon family while rewarding investors in alternative fuel programs, which cannot compete without government subsidies.

Betsy Close, left, and Sara Gelser with other candidates at Albany City Hall on Sept. 10.

So, for keeping the economic interests of average citizens in mind, Betsy Close can expect to be deluged with a wave of anti-Close campaigning in the few weeks before ballots come out. It’s not as though Rep. Sara Gelser of Corvallis, Close’s opponent, needed any more money in her campaign. As of Wednesday, Gelser had an advantage of two to one in cash contributions and more than two to one in cash on hand. Close had $40,610 left, and Gelser $101,225.

Among Gelser’s big donors is the political committee of Oregon trial lawyers, which gave her $15,000. In addition to her cash advantage, Gelser also has had the benefit of more than $61,000 worth of “in-kind” help from the Senate Democratic campaign arm. Her liberal policies notwithstanding, Gelser is a personable, energetic and likable candidate. She can count on the votes of overwhelmingly Democratic Corvallis. She hardly needs the help of a California billionaire. (hh)