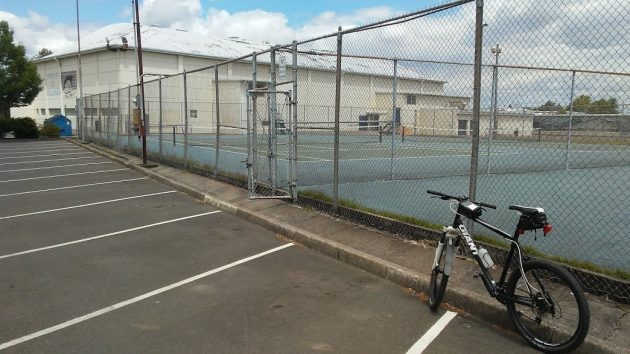 Nobody was playing Monday on the courts at West Albany High School, which will give way to the planned new performing arts center.

Two things I noticed right away about the planned addition to West Albany High School: The tennis courts will have to move, and there’s no perimeter fence like the one planned at South.

Greater Albany Public Schools has submitted plans for the West addition to the Albany Planning Division, and the city mailed notices to property owners within 300 feet of the school, asking for comment by July 12.

The project will add 101,900 square feet of building space on the south side of the school. This includes a theater, an auxiliary gym, classrooms, a new main entrance, and three new parking loops, one for buses, one for students’ vehicles, and one for visitors and others.

Some parking will be lost but more will be added for a total of 429 spaces, an increase of 70 spaces or 4 percent. This is supposed to be enough so that about half of the people with cars can find a place to park. (The plan envisions 1,620 or more occupants — students and staff — of whom about 870 would need a parking space.) The plan also calls for 32 new bike parking spaces, 22 of them covered. Twenty-nine uncovered space would remain.

The four tennis courts at West will be moved south to 24th Avenue S.W. There’s a vacant grassy spot there, just east of Liberty Elementary School.

At South Albany High, where the school district is also planning a major renovation and addition, the plans call for a perimeter fence with electronically controlled gates to let buses through. No such fence is shown in the plans for West.

That’s because unlike South with its many buildings and people moving about in the open among them, West is a more contained complex of connected structures. That’s the explanation I got from Russ Allen, the GAPS business director.

Allen told me estimators are working up what the West project may cost. Construction bids will be sought in about six months. 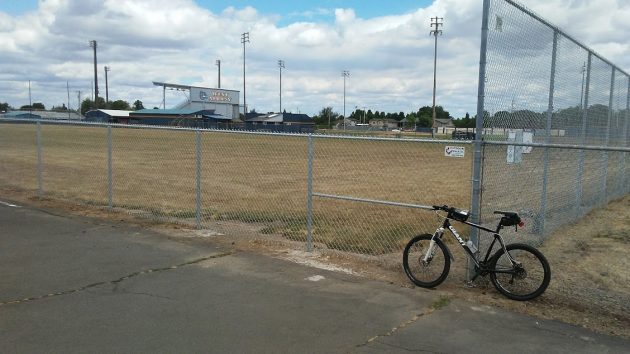 This is the spot picked for West’s four tennis courts. Looking northeast from Liberty School.

Meanwhile at South, the plan to add a gymnasium and classrooms, plus the 8-foot-high perimeter fence, suffered a setback when the school board on June 4 rejected all three bids as too high. The project had been estimated to cost around $9 million, and all three bids came in at more than $12 million.

The district will call for new bids in the fall, when contractors might be less busy than they have been lately.

As for the 8-foot fence at South — cyclone for the most part — the June 4 board meeting heard concerns that it would not look good. But the board was told that using all decorative fencing instead of the cyclone type would increase the cost from about $125,000 to $500,000. So, what kind of fencing to use? That apparently remains unresolved. (hh)