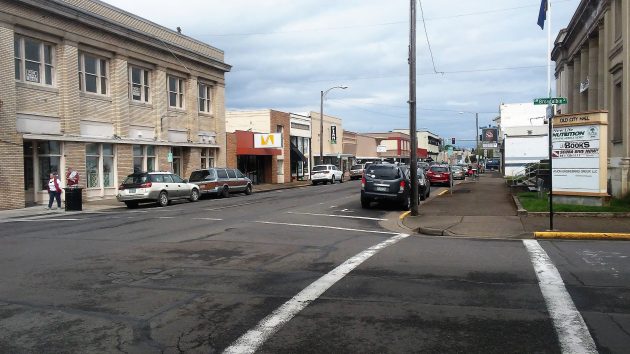 Second Avenue at Broadalbin: The center of the project to provide new pavement, sidewalks, trees, overhead lights and more.

Albany is about to launch its biggest urban renewal project yet, an $8 million reconstruction of downtown streets that starts with a public open house on May 18.

As expected, on Wednesday night the city council awarded a contract of $7,988,501 to Emery & Sons Construction of Salem, the lowest of three bidders. (In my May 5 story on the bids, I at first mistyped the date of the open house, so here I put it at the top. It’s from 4 to 7 p.m. next Thursday at City Hall. City engineers and representatives of the contractor will be there to answer questions about the project including its scheduling intended to minimize disruption of businesses and special events.)

The first phase of the downtown “streetscape” project — reconstructing streets and underground utilities surrounding the Albany Post Office — was mostly completed during the winter. City Engineer Stacy Belcastro told me she understands the post office plans to put back its drive-by mail drop on First Avenue once the final paving is done.

Phase 2 will tear up and repave downtown portions of Second and Third avenues and their cross streets. (The details are in a memo to the council here.) Demolition and underground utility work will be done mostly at night. New sidewalks, curbs and so forth will be built one block at a time. But the final paving will likely take place in bigger segments.

Belcastro told the council Wednesday that ODOT had agreed to increase its contribution to the project so that by the end, the sidewalks on Ellsworth and Lyon streets, the Highway 20 couplet downtown, will be fully compliant with the requirements of the Americans with Disabilities Act.

CARA, the downtown urban renewal district, is financing the project by borrowing. Property taxes are used to pay off the loans CARA takes out. The project follows up on the reconstruction of parts of First Avenue, one of the first big CARA ventures after the city council formed the district in 2001. (hh)