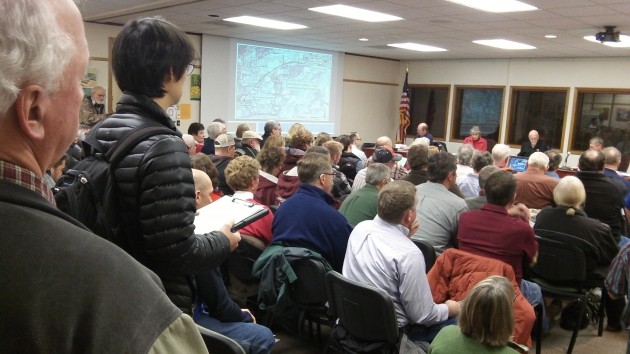 The crowd awaits the start of Tuesday’s hearing. On the wall, a map of the planned path.

UPDATE: Tuesday night’s hearing was continued until next Tuesday, 7 p.m. Dec. 9 in Benton County’s Sunset Building, for more testimony. About 20 people spoke in favor of the plan for a bike trail between Albany and Corvallis, and six farmers spoke against it.

A public hearing on the planned Albany-Corvallis Bike Trail drew an overflow crowd Tuesday night. And as the hearing dragged on past its first hour, I could not help but think that Benton County might have wanted to take this important procedural step years ago. 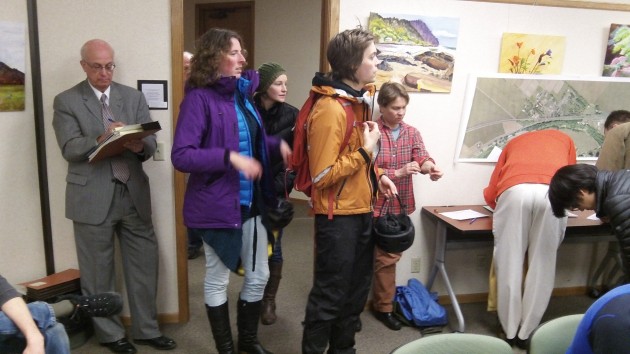 About 100 people jammed into the county’s Sunset Building meeting room in Corvallis, filling all the seats and lining the walls, and in he hallways outside another 20 or so were listening through open doors. At issue was a conditional use permit to allow the main 5.5-mile segment of the path, from near Manchester Street in northeast Corvallis to Scenic Drive in North Albany, to run across fields zoned for exclusive farm use.

About a dozen farmers whose property would be affected have raised strong objections, fearing the path and its users would interfere with their operations. Ed Schultz, the Albany land-use attorney, represents some of them. Their objections are likely to delay the project and may even kill it by appealing any permit as far as they can, ending in the courts.

The path was first proposed more than a decade ago, and a study in 2004 found it would be feasible. Originally, though, it was envisioned to run along the Union Pacific tracks on the railroad right of way. That idea foundered on the refusal of Union Pacific to allow it.

A short section of the path near Cheldelin Middle School in Corvallis has been built, but it ends uselessly a few hundred yards from its start.

Benton County has won a $2 million state grant to fund construction of part of the main segment. But any substantial delay — such as a prolonged appeals process over the land use permit, or the need to change the planned route — could jeopardize that funding in the current round of the Connect Oregon program, under which the money was allocated. (hh) 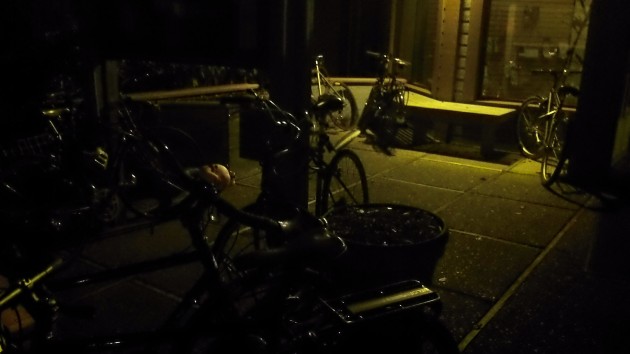 In the dark, bikes are parked outside the hearing venue, 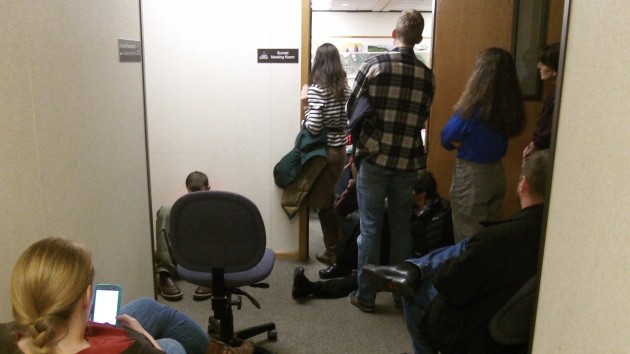 Trying to listen from outside the hearing room.