Most bicyclists want their rig and outfit to be as light as possible. No such luck if you’re riding a bike on police patrol. Here’s a quick video tour of the police bicycle ridden by Officer Jorge Salang of the Albany Police Department’s community resource unit. 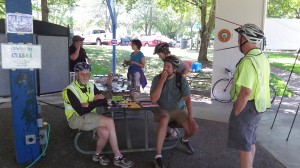 Bike event all set, but no kids.

The officer was all set to take part in a special bike event today (July 22) for children who had completed a bike riding and safety course as fifth-graders during the school year that just ended. A dozen or more volunteers and other adults waited at Monteith Riverpark to help with the event, but none of the former fifth-graders showed up. If they were riding their bikes in the afternoon’s glorious summer weather, they were doing so away from this organized event.

Salang says he and other officers who occasionally patrol by bike had to take a four-day course and pass a test in order to qualify. On patrol they carry the full gear that goes along with modern policing, and it adds about 30 pounds. The final test was a 26-mile ride wearing all the gear. The route took them over the hills on the way from west of Philomath to the Corvallis airport and back to the training grounds. “To see if we could take it,” Salang says. Evidently he could, (hh)