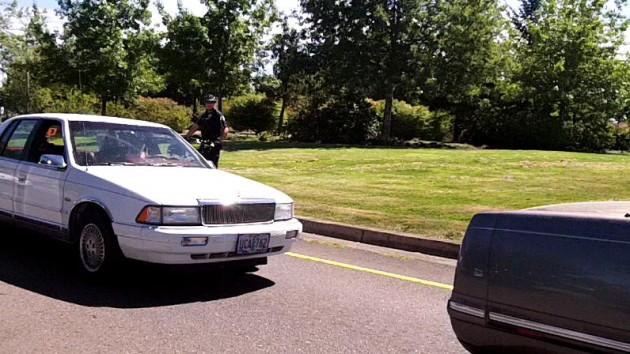 Another angle: An Albany bike cop on patrol recently, watching for seat belt violations near Santiam and Pacific.

Once again Albany has missed out being mentioned among America’s 50 best bike cities as listed by Bicycling magazine. Corvallis and Lebanon got left out, too. The likely reason: the magazine’s list consists only of cities of 100,000 or more, and most are much bigger than that. As it happens, mid-valley towns are great for cycling, partly because of their relatively small size but mostly because they thave taken care to plan and provide for pedal-powered transportation on two wheels.

In Albany, for instance, all major thoroughfares and many arterials have designated bike lanes. In addition, there are miles of separate bike and pedestrian paths, including the 1.8-mile Periwinkle Creek Path, which runs all the way from the center of town to the outskirts in the southeast. (Its only flaw is the Queen-Geary intersection, and the current edition of Bicycling shows an inexpensive way such intersections can be made manageable for cyclists.)

Albany’s ratio of bike lanes and paths per square mile is 2.9 (53 miles of lanes in 18 square miles). That, incidentally, is better than the 2.5 listed for Portland, which is fourth on the magazine’s list.

Beyond that, volunteers have seen to it that Albany grade schools have an active bike training and safety program for fifth-graders. And the city has a special advisory conmission on bicycle and pedestrian concerns. Albany also has a bronze designation as a bike-friendly town from the League of American Bicyclists. Many businesses and some places of employment have provided a place to park or secure bikes, making it relativey easy to get around town for work or errands.

The magazine’s list of best American bike towns is topped by New York City, largely on the basis of Gotham’s growing bike-share program, which allows commuters to come in on the train and then check out and return bikes at public kiosks. But such a program is out of place in a small town, where getting around on your own bike makes a lot more sense. And as for riding a bike without braving excessive exhaust, congestion and noise, Albany and other towns around here clearly have America’s “best bike town” beat. (hh)