Benton will patrol on propane 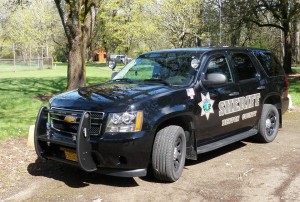 The Benton County Sheriff’s Office features this vehicle on its Facebook page.

Benton County residents will want to keep an eye on their sheriff’s experience with “autogas.” Sheriff Scott Jackson has announced that most of his department’s patrol vehicles will be refitted with a dual fuel system, allowing them to run on either conventional gas or propane. If this proves as efficient and economical as the sheriff hopes, private citizens who drive a lot may be tempted to do the same.

The Benton County commissioners authorized spending up to $84,000 on the conversion of the sheriff’s several Ford Crown Victorias and Chevy Tahoes, one Ford Expedition, an F-150 pickup and a Ford van used to shuttle inmates to and from various jails. The vehicles will use gasoline to start up and immediately switch to propane. And if they run out of propane — on a long chase, say — they’ll switch back to gasoline. Jackson hopes the newly retrofitted rigs will be running this summer.

County fleet manager Jim Burke sent word that the cost of each conversion, to be done at the advanced auto tech center of Linn-Benton Community College in Lebanon, will pay for itself in two to four years, depending on the vehicle. Overall, the sheriff’s office expects to save $15,000 a year in fuel expenses. (No word on any repeated or continued conversion expense when new vehicles come on line, or will they come already equipped)

The hoped-for savings are based on the assumption that propane costs $1.25 per gallon less than gas. Let’s hope there are no unwelcome surprises on that score. This past winter CoEnergy, the local propane supplier, had to explain to its customers why prices were rising “almost daily.” The bitter winter was to blame, along with a pipeline issue.

Even if the savings fall short of expectations, I get the feeling the county would still say the conversion is worth the cost because propane results in less CO2 and other exhaust gases. Capt. Greg Ridler of the sheriff’s office told me: “For law enforcement, I think propane combines a desire to be responsive to our community values and still (meet) our unique police needs, such as power, range and a known, proven mechanism to respond to a public safety emergency.”

There might be a side benefit to the public. Besides installing a fueling station at the county’s public works yard, CoEnergy will install another one at a site yet to be determined, and that one will be open to the public. (hh)


3 responses to “Benton will patrol on propane”