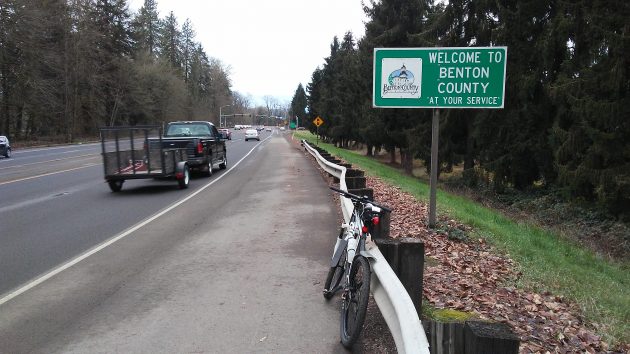 “Sanctuary county” likely won’t be added to the welcome signs of Benton County.

For symbolism without substance, few actions will beat the “declaration of sanctuary” by the Benton County Board of Commissioners. Maybe the declaration makes some people feel better, but it changes nothing in the real world.

The week before Christmas, the Benton board followed the lead of Oregon State University, the Corvallis school board, and the city of Corvallis by adopting “a Declaration of Sanctuary.” The operative sentence was this: “Benton County will not participate in or facilitate any federal efforts to register individuals based on their religious affiliation or other status.”

Donald Trump has talked vaguely about sending illegal immigrants home. This is impractical, but what’s wrong with it in principle? Lately, though, his team has defined that goal as affecting mainly, or even only, those undocumented people who have committed crimes. There won’t be any federal program to register anybody based on their status as illegal aliens, their religion, or anything else.

The county board declared: “We must act now and always to uphold our commitment to be a community free of prejudice, bigotry, and hate.” Obviously, but that has nothing to do with trying to slow down, prevent and even reverse illegal immigration. Immigration laws exist for a good reason, and believing that they ought to be followed is neither bigotry nor hate. (Especially when you consider the red tape that legal immigrants have to go through.)

In practice, Benton County’s declaration changes nothing. Since 1987 Oregon has had a law barring state and local law enforcement from arresting anyone only for being in the country in violation of immigration laws. But the law specifically allows Oregon police to cooperate with federal authorities to verify the immigration status of anyone arrested for a criminal offense and to request information on people’s immigration records. In addition, the law allows Oregon police to arrest anyone the feds have charged with a criminal immigration offense. They can also arrest anyone named in a federal warrant. In short, the law allows state and local police to take normal law enforcement action regardless of a suspect’s citizenship status. There’s no sanctuary for crime.

Some years ago, I served on a Benton County jury in a minor case arising from the “Icebreaker” operation, in which law enforcement smashed a big-time drug ring. The defendant didn’t speak English and had an interpreter in court. We found him guilty of part of what he was charged with, and I assume he spent some time in jail after that. I don’t know what happened after he got out, but if he was deported, it was his own fault. If he hadn’t done the crime, he wouldn’t have been in court. It had nothing to do with hate. (hh)


8 responses to “Benton ‘sanctuary’ changes nothing”