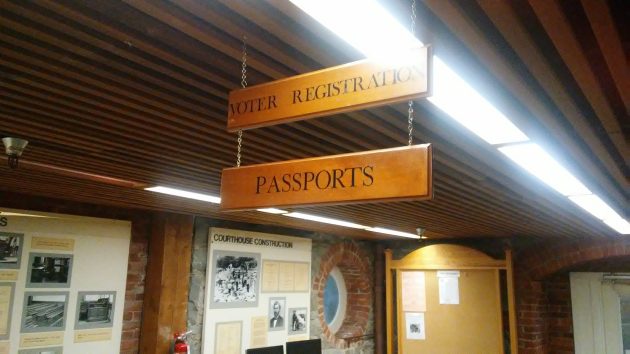 The elections office in the basement of the Benton County Courthouse in 2018. The office will move away from downtown Corvallis later this month.

As far as I can remember, I’ve been inside the historic Benton County Courthouse only twice, the last time nearly four years ago when my wife and I went down into the basement (pictured above) to change our registration to vote.

We won’t be going there again, because later this month the records and elections office in the courthouse will be closed in order to move to new quarters on the west side of town.

I dug out the photo I took that day, in August 2018, thinking I might be able to use it some day to illustrate a story. As you can see, that day has come.

On Tuesday the county announced that three offices will move to the county-owned “Kalapuya Building” at 4500 S.W. Research Way.

The assessor’s office will go there Thursday from the Sunset Building, also on Research Way. It will be closed until opening in the new place the following Wednesday, Jan. 19.

Records and elections will leave the courthouse basement on Jan. 20 and reopen to the public on Jan. 25.

And starting on Jan. 27, the board of commissioners will close their offices on Fifth Street so they too can move to the Kalapuya Building, where they hope to reopen to the public on Jan. 31, a Monday.

All the offices will try to do business on the phone and online during the transition, the county’s announcement said.

The announcement didn’t mention it, but the the Kalapuya Building has 54,000 square feet on two floors and is surrounded by 275 parking spaces. No more hunting for an empty parking meter in downtown Corvallis when having to visit those offices in person. (For North Albany residents, that makes up for having to drive a mile or two farther.)

The building used to be known for its main tenant, the Fiserv financial services company. The county bought the property in 2020 for $7.1 million from the OSU Foundation, intending to consolidate services there, near the Sunset Building it had bought for $3.3 million in 2010.

What was the other occasion when I spent time in the historic courthouse? A hapless defendant helped by an interpreter and a public defender was on trial in circuit court, accused of trying to destroy evidence of drug deals by smashing a cell phone when the Corvallis cops came to arrest him. I was on the jury, and we convicted the guy.

That time, and again later for the visit to elections, I was miffed at having to hand over my little three-inch Swiss Army knife before passing through the metal detector. I got it back when I left, of course.

Prudent security measures are one thing. But a little pocket knife? What if I had needed to sharpen a pencil while, as the foreman during our jury deliberations, I had wanted to take notes? (hh)