Being a soft touch could cost you 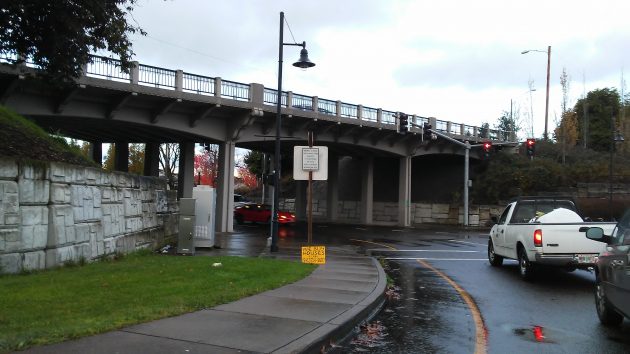 This used to be a favorite spot for requesting handouts from cars stopped at the light.

Albany police have used social media to call attention to a new city law: No more handing money — or anything else — from your car to panhandlers by the side of the street.

The city council passed the ordinance on Monday, and with an emergency clause it took effect right away. It’s a tougher version of a law that’s been in effect for two or three years and whose effectiveness apparently had worn off.

As the police department explained in a Facebook posting, the new law “prohibits occupants of a vehicle from passing money or property to pedestrians while they are in the roadway.” According to the text of the ordinance, though, the pedestrians need not be “in the roadway” for the offense to take place. Being on the sidewalk counts, too.

The law does not apply if a vehicle is legally parked or when there’s an event such as “Fill the Boot,” the annual fundraiser (I think it’s against muscular dystrophy) in which off-duty firefighters accost drivers along busy streets and ask them to throw a dollar or two into the footwear held in their outstretched arms.

The law is plainly aimed at stopping what’s become a fixture in Albany and other towns: People standing at street corners holding cardboard signs asking for donations. The text passed by the council, though, justifies it as a safety measure to prevent distracted driving and even road rage caused by delays.

Police Chief Mario Lattanzio told the council during a work session earlier that the previous law, which prohibited holding up traffic in order to give a panhandler something, had resulted in no citations. The new law, too, is unlikely to see enforcement unless an officer actually observes a violation and has the time to follow up.

If you’re caught giving somebody something from your car, the law says you can be fined up to $75. The recipient can be fined the same amount.

The police posting pointed out that if you want to help people in need, it’s better to give money to organizations such as Helping Hands, Signs of Victory Ministries, or Fish of Albany. (hh)


9 responses to “Being a soft touch could cost you”