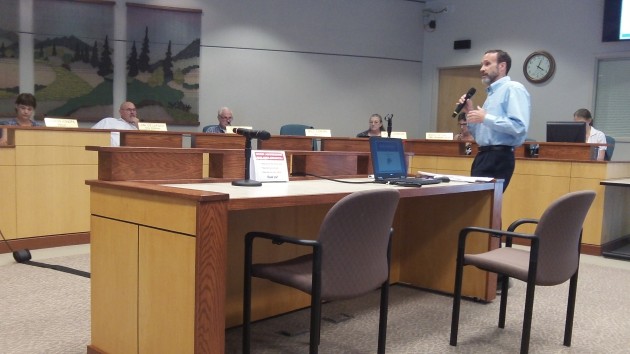 The new and improved table has plenty of space for two or three speakers to sit, but utility manager Mark Yeager on Monday preferred to stand.

One of the themes I have harped on a couple of times, when things were slow, was the cramped little rostrum where people addressing the Albany City Council were supposed to sit. So it is fitting to acknowledge the great improvement in that department that has now been achieved.

The old rostrum or speaker’s desk had room for only one person at a time. So when the council wanted to hear from two or more, there was this awkward shuffling as people changed places in front of the microphone. I’ve seen people kneel on the floor next to the seated speaker in order to work the keyboard for a presentation. It looked silly and wasted time.

I was not the only one harrumphing about this. Councilman Dick Olsen did too, at least once that I recall. And it worked.

Some time ago, when this first came up, City Manager Wes Hare undertook to get a different and bigger table. It wasn’t easy. Not any table would do. Mayor Sharon Konopa, among others, wanted to be sure the new furniture matched the design of the council dais itself, which has been unchanged since City Hall was built.

Gary Goby is a longtime Albany physician, now retired. More important for this story, he’s also an accomplished craftsman in wood, especially oak. It was he who built the new speaker’s table that got its first public airing at the council’s work session Monday. The  front and sides are made of maple and the top is red oak. It has ample seating space for two speakers, three if needed. And, the mayor said, the city got this solid piece of handsome work for a mere $900.

Now, to fill this digital space on nights when the dearth of easy topics is particularly dire, I’ll have to think of something else. (hh)