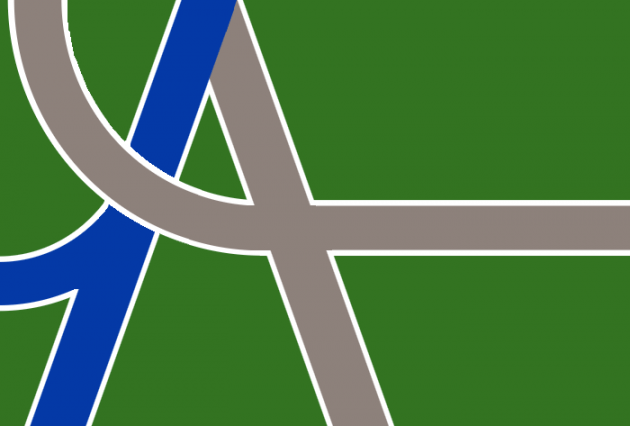 Confluence and Crossroads — that’s the symbolism of the new Albany flag.

You’re looking at the winning design for an Albany flag, chosen by the city council Wednesday night, though what will be done with it is not entirely clear, at least to me.

The city conducted a design contest after a club of students at West Albany High School asked the council to consider adopting an official Albany flag. For some reason the students are fascinated with what they consider good principles of flag design, and they call themselves the Greater Unified Albany Vexillological Association.

The contest produced 40 entries, and a jury’s review resulted in five semifinalists. Those were subjected to a rating by the public, and 258 people submitted their opinions. One of the original designs by the club as a group came out on top of the rankings, and that’s the one the city council voted to accept on Wednesday.

The flag club called this design “Confluence and Crossroads,” and you can see both concepts carried out in what amounts to a pictogram.

Now what? Maybe somebody — perhaps the flag club at West — will get someone to sew up a couple of banners using this design and present them to the city, and then one presumably will be run up a pole at City Hall. (Linn County adopted a county flag some years ago, and as I understand it had three copies made. One flies in front of the courthouse, though I doubt a single member of the general public would recognize it as the county flag.)

Councilor Rich Kellum wondered why the city should get involved with something like this. The answer — though nobody put it plainly — is that for once the city got some people under 20 to express an unsolicited interest in city government, off the wall though it may have been, and even come to a council meeting of their own volition. And the council wasn’t about to tell them to go away. (hh)

Postscript: As for what happens next, this was in a press release from City Hall Thursday: “The students and their adviser, Cole Pouliot, will be formally recognized and presented a $100 cash prize at the September 14, 2016, City Council meeting.  The club has declared that the money will be used to produce the flag, which they intend to carry in the 2016 Veterans Day Parade before it flies at Albany City Hall.”