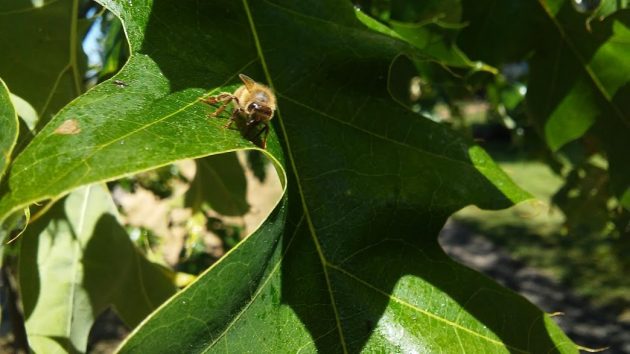 This was something I had not seen before: Bees (including this one) busily sucking up the shiny stuff on the leaves of this young oak on an Albany street.

And here’s a shot of a different bee doing the same thing: 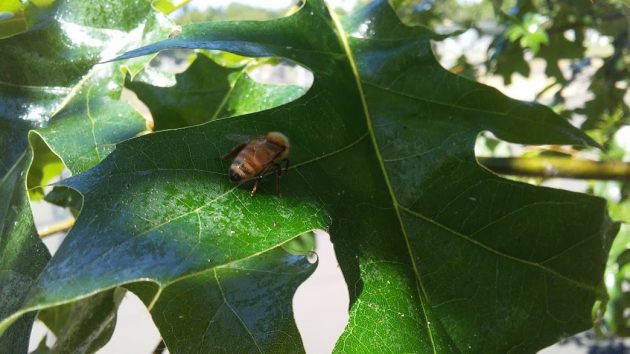 I thought bees were fond of all kinds of blossoms where nectar could be obtained. I had never seen them paying attention to the leaves of deciduous trees before.

As luck would have it, we have a very useful Oregon State Extension Service. The service answers questions and puts the answers online.

In 2013 somebody had asked: “What is causing our oak tree to be covered with what appear to be feeding bees?”

“In every case I’ve seen (including two in my back yard), the cause is indirectly aphids,” answered somebody at the Extension Service identified only as “Bob R.”

The gist of it was that there were aphids on the oak leaves, that they caused minimal harm, but that they extruded honeydew, which Extension Bob described as “basically aphid waste which is very high in sugars.”

Bees feed on sugars, which usually means nectar from flowers, but they are not shy about consuming aphid waste on the leaves of trees when nectar gets to be in short supply.

This sounds plausible to me, because the oak leaves I’m describing are lousy with aphids. These dot-like things are are white and tiny, smaller than the head of a pin. I think what I’m seeing is aphid eggs, actually, if there is such a thing. There also are a few winged creatures, nearly transparent and almost as tiny as the dots, and I’m assuming that they are the next stage of life of these things.

The only remaining mystery is why the aphids — if that’s what they are — always inhabit the underside of the leaves while the shiny gunk attracting the bees is on the opposite side. (hh)

4 responses to “Bees on oak leaves: A mystery solved”