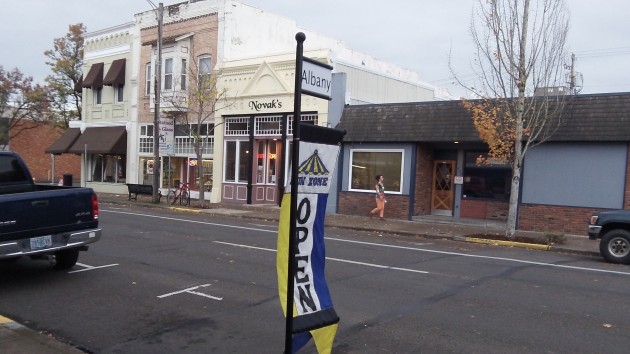 Second Avenue near Ellsworth: Angled parking is not in the plan.

Half a dozen blocks of downtown streets are going to be dressed up to make them look similar to First Avenue at a cost of $1.4 million, according to what I heard about a decision by the Central Albany Revitalization Area advisory board.

The board met Thursday night. I wasn’t there, but I heard about the result from City Manager Wes Hare and others. At issue was the extent of proposed “streetscape” improvements downtown in order to encourage business development.

The upshot, after what I was told was more than two hours of talk, was that a “basic” treatment would be applied to three blocks of Second Avenue from Washington to Ellsworth streets, two blocks of Third from Ferry to Ellsworth, and one block of Broadalbin from Second to Third. The streets would get a three-inch layer of new pavement, the sidewalks would be reconstructed, and there would be street furniture such as benches and so forth.

The board decided against installing so-called “double acorn” decorative lights. Nor would there be sidewalk planters or bulbouts, and there would be no overhead wiring for banners or above-the-street lighting, all of which had been suggested by CARA’s consultants.

Also, despite strong advocacy from Novak’s restaurant and others, there will be no angled parking. Consultants had told the city that diagonal spaces would not yield much additional parking but would create congestion that would keep people from going downtown, causing business to suffer.

What about diagonal parking in the thriving downtown of Corvallis? Apparently the right of way of Corvallis streets with angled parking is 10 feet wider than in Albany. (Diagonal parking is in the city plans around the Albany Post Office when the Albany Carousel headquarters is built nearby, but conditions there evidently are different from Second and Third.)

Next, the board’s decision will be submitted to the city council acting as the Albany Revitalization Agency for approval. The construction would be done next year. (hh)

POSTSCRIPT; Rich Catlin, chairman of the CARA advisory board, adds that the schedule is still not settled. “It’s premature to declare construction will occur in 2016.”