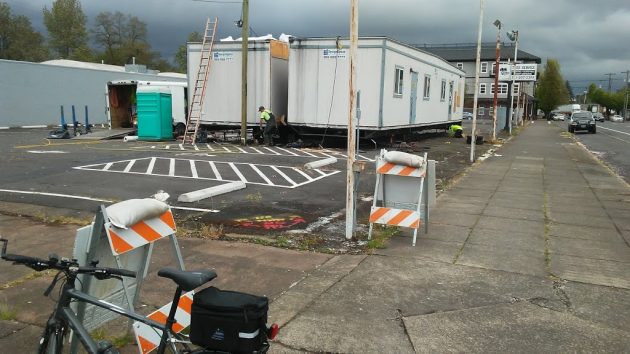 The mobile home that served as Washington Federal’s branch was being dismantled on Wednesday.

The remodeling of Washington Federal’s banking branch in downtown Albany was finished just in time for its lobby to be closed to the public because of the corona panic.

On Wednesday I noticed that the bank’s temporary branch, a double-wide mobile home at the corner of First Avenue and Baker Street, was being taken apart before being moved out. The bank had set it up in 2018 in preparation for remodeling its building at 300 Ellsworth St. S.W.

The remodeling is done, evidently. But now, like at other banks, a sign at the door Wednesday said the lobby was closed except by appointment.

When I asked the bank for details about its remodeling plan in 2018, such as the reason for it, I never got an answer.

According to building permits on file at City Hall, the estimated valuations of all the various elements of the project — from improvements in the basement to the ground floor and the roof — came to nearly $1.3 million. Setting up the mobile home was valued at another $80,000, according to the permit for that aspect of the project.

The building on Ellworth, at the corner of Third Avenue, was built in 1978 for State Savings & Loan, which went under in the savings and loan debacle of the 1980s. On the tax records, its owner is still listed as Freedom Federal, one of many financial institutions which over the years became part of Seattle-based Washington Federal.

The official name of that bank now appears to be WaFd Bank, according to its online presence, but since nobody can pronounce that, customers probably call it Washington Federal still. (hh)