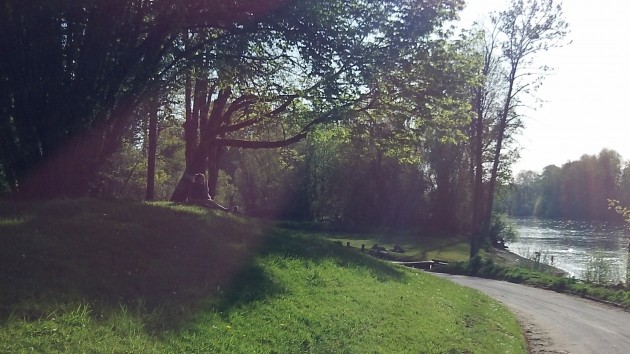 Far from anyone else, a smoker takes her ease at Bowman Park on Friday.

(Please see the update at the bottom of this story.)

We have plenty of rules, so by all means let’s have one more: No more smoking in Albany parks. Or “vaping” either. And if you have bad breath, please, stop breathing altogether lest somebody downwind get an unwelcome whiff.

I’m making that up about banning bad breath, but maybe that’s next. For now, Albany Parks Director Ed Hodney is asking the city council whether he and the parks commission should develop an ordinance to ban the outdoor use of tobacco and vapor “cigarettes” in the city’s parks. The council will discuss it at its work session at 4 p.m. Monday at City Hall.

The city already restricts smoking at park concerts, where people are told to repair to designated areas if they insist on lighting up. Is anything more required? Do we really need one more regulation aimed at the few remaining unfortunates who have not yet been able to quit tobacco?

Maybe on a spring day like Friday, looking for a little break that doesn’t cost a lot of money, one of them wanders down to a park, sits in the grass far from anybody else and has a smoke while enjoying the first warm day in months. Does the city want to deprive a person of even that brief respite from life’s travails?

Of course not. The council would expect the ban to be ignored in a case like that. Even if a police cruiser made an excursion through the park and officers spotted somebody lighting up, they would be unlikely to stop the car, get out, climb the hill under the trees and say, “Hey, put that out, and if you drop the butt in the grass you’re getting a ticket for littering, so you better not.”

But if we expect the ban to be ignored when a smoker truly doesn’t bother anybody else, why impose a general prohibition? As Hodney points out in his council memo, many other jurisdictions have banned tobacco use in parks. Smoking has become so rare these days, you have to wonder why they think it’s necessary to post one more rule. (hh)

Update: The council discussed the issue for a while on Monday and showed no enthusiasm for a general smoking and “vaping” ban in all city parks. But members encouraged the parks staff to continue to urge smokers to go to designated areas during concerts, and to ask “vapers” to do the same. Parks Director Ed Hodney expects the issue to come before the council again but says the parks staff won’t be bringing it up. (hh)