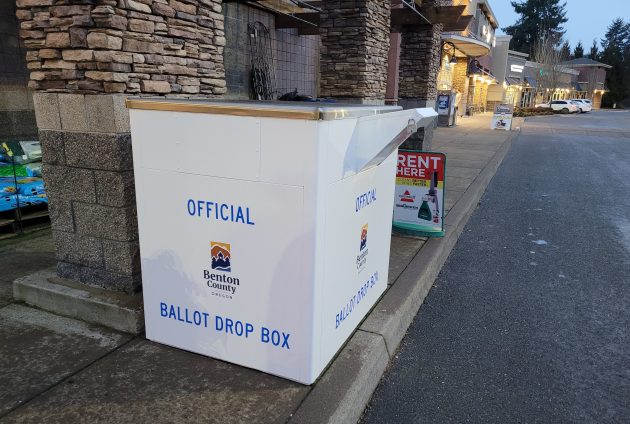 Take a look at this supersized ballot drop box Benton County has installed outside the North Albany IGA supermarket.

This big new ballot drop box caught my eye in the North Albany Shopping Center the other day. What’s the story here, I wondered.

Benton County Clerk James Morales and his staff, including elections supervisor Darla Rush, have had their hands full adjusting their systems to reflect the new legislative and congressional district lines. On Thursday they also were on their last day in their old courthouse offices, preparing to move starting today (Jan. 20) to the Kalapuya Building on Research Way.

Still, they responded to my inquiry about this box, which replaced a smaller one and is one of three that were installed this week. The other two are in the Timberhill Shopping Center and in front of the courthouse in Corvallis.

“These boxes were given to Benton County by Lane County,” Morales told me. “All we had to do was pick them up, give them a fresh paint job and coordinate installation.”

In addition to the three big ones with their drive-up “snorkels,” the gift also included four snorkel-equipped postal-size units. The county is placing those in Monroe, near Lincoln School in Corvallis, in Adair Village, and at the new county offices at 4500 Research Way.

The North Albany ballot drop site had been popular, Darla Rush said, and election workers had to empty it frequently. The bigger boxes won’t have to be emptied quite so often. (That’s why one of the new big ones is at the courthouse. The staff will no longer be there to empty it several times a day.)

In North Albany, if drivers want to drop ballots there from their cars without a passenger’s help, the orientation of the box and its snorkel will require them to drive on the wrong side of the shopping center street. The county is aware of that, Rush says, but there was no other secure place to put the box.

Security is a big consideration. The location has lighting and camera coverage.

The new boxes will see their first use in the primary election, which ends May 17.

Why do we still have drop boxes at all when we no longer even need stamps to mail our ballots back? A new law also says ballots postmarked by election day are to be counted if they arrive up to seven days later, eight days if mailed from outside the county.

Well, while the post office is reliable, you really lose control of your ballot when you put it in the mail. It has to go to Portland first, and who knows how and by whom it is handled on the way. When you drop it in an official, locked box like this one, you know that the next person to touch it will be a deputy or elections employee of the county clerk. (hh)