Backing in: Not yet 100 percent

After hours Tuesday, a lone vehicle is parked nose-in at the Albany Post Office.

The back-in parking requirement on the left side of Second Avenue at the Albany Post Office turns heads, literally and of necessity. But it still has not completely caught on.

After 5, as in the photo above, you can park nose-in with apparent impunity. If nobody is around, who’s going to care, let alone whip out his ticket book? 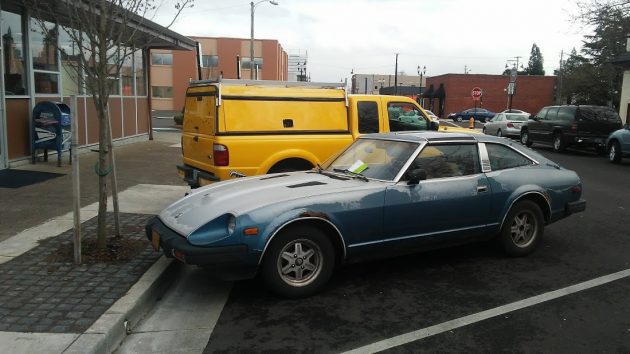 But this hapless fellow got caught during the day on March 2.

Considering all the complaining when the back-in parking on two streets bordering the post office was imposed last spring, I recently wondered how many drivers had been issued citations for parking there head-in. I asked Lise Grato, executive director of the Albany Downtown Association whose ParkWise program is handling parking enforcement downtown.

She couldn’t tell me. Until recently, ParkWise didn’t have a separate code in its system for violations of the “back-in parking only requirement,” which was new for Albany when it started last year. To get a number, someone would have to review parking tickets and study the photo attached to each. Who has the time, or inclination? Not me, and not Lise Grato.

But she told me, back on March 5, that when the new requirement took effect, ParkWise issued “friendly warnings” instead of citations for a time when somebody was parked nose-in.

“Getting motorists to back-in angle park is an ongoing issue,” Grato wrote to me then. “Mid-afternoon I drove along Calapooia, and there was a car parked front-in.”

And as I noticed when I snapped these photos outside the Second Avenue post office door, it evidently takes more than a few signs and a few months of acclimatization to draw everyone’s attention to the prescribed way to park. (hh)