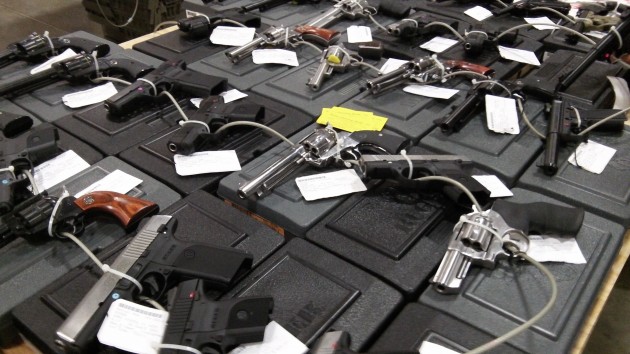 At shows like this, background checks are already required.

Since the start of the Oregon legislative session, everybody interested in firearms has been waiting for the subject of expanded background checks to rear its controversial head. Here it is eight weeks in, and still no bill. But it’s coming, and now I have an idea of what the bill will say.

I have an idea because I asked Sen. Floyd Prozanski, D-Eugene, what was happening on that front and whether perhaps the plan was to amend the expanded background check into one of the 16 already pending bills related to firearms. Prozanski is chairman of the Senate Judiciary Committee, which cleared a background check bill last session but was unable to get it through a closely divided Senate.

I emailed the senator Tuesday, and he replied without delay. “The bill is still being drafted by legislative counsel,” he wrote. “It will be a new bill. It will have three parts: closing the current loophole in the background check law – private to private sales that do not occur at gun shows; require judges to determine if a person who is court ordered into outpatient mental health treatment should be restricted from having possession of guns while in treatment; and codify the current executive order requiring state police to notify local law enforcement agencies when a person who is ineligible to possess a firearm attempts to acquire one through a transaction that required a background check.”

Prozanski did not say so, but I expect the background check requirement on gun sales to have exemptions for transfers among family members as well as for temporary loans, such as taking friends to the range and letting them try various firearms.

The FBI’s logo of the NICS.

Even with reasonable exemptions, the added requirement would impose an administrative burden on sellers. Licensed firearms dealers are familiar with the process: calling the state police, paying the fee and obtaining the required clearance — that a buyer is not disqualified — from the National Instant Criminal Background Check System (NICS). Private sellers could avoid the hassle by asking someone with a federal dealer’s license to facilitate the sale, which most dealers would probably do for a small fee. So the bill would impose no huge hardship.

Still, legislators should want to insist on data showing what good would be done by expanding the background check requirement. The theory is that it would keep guns out of the hands of criminals and people whom authorities know to be judged mentally ill. But to be credible, the theory needs facts. How often do Oregon criminals buy guns from honest private citizens, the kind who would abide by this new requirement? Or, of the guns used in Oregon crimes over the last 10 years, how many were obtained by means that this bill would prevent from now on?

If the facts don’t show that the bill would prevent substantial harm, there’s no reason to pass it no matter how well intentioned it may be. (hh)