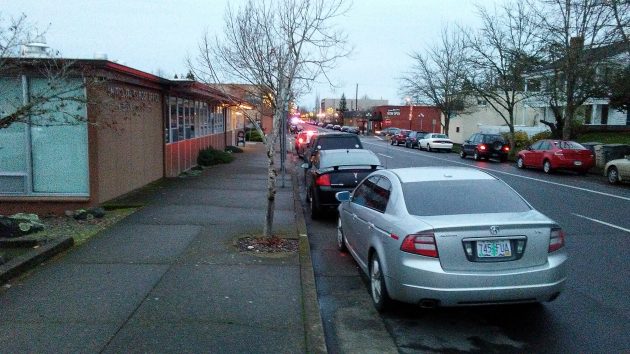 The parking spaces along this curb on Second Avenue outside the post office will be replaced by back-in parking.

Albany drivers might want to start practicing how to back into a diagonal parking space on their left without hitting the vehicles on either side. If they plan on parking on the street outside the post office, they’ll need that skill starting some time next year.

The city council on Wednesday will be asked to award a contract of about $742,000 for street improvements on three sides of the Albany Post Office. A big part of the plan is to install back-in diagonal parking. The downtown urban renewal board decided on that option in May when it approved the work around the post office as Phase 1 of a much bigger streetscape improvement program.

The city opened eight bids for the work. The staff is recommending that the contract be awarded to Pacific Excavation of Eugene, the low bidder at $741,697. The project includes new asphalt, sidewalks, and trees, on the three blocks of First, Calapooia and Second, as well as curb extensions. It also includes about 1,600 feet of new water line and related fixtures on those streets as well as Washington Street and Water Avenue.

When this work is finished, probably about April, the city expects to launch similar work on parts of Second and Third, Ferry and Broadalbin, but without the diagonal parking. (hh)