Back-in parking on the wrong side 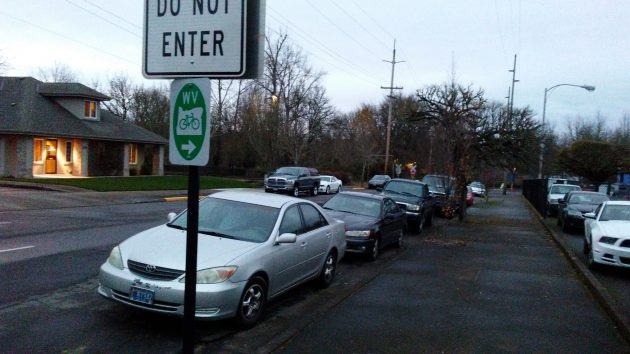 Calapooia Street on the west side of the post office will get driver’s-side back-in parking.

Albany officials cite several benefits of the back-in diagonal parking that will be installed on three sides of the post office starting in January. They don’t mention the downside, which motorists will probably notice when they try to use the new setup.

The current issue of City Bridges, the city government’s newsletter, tells us: “Back-in angled parking creates significantly better visibility when pulling out of the space as the driver is looking forward into the lane and can see oncoming vehicles and bicycles without obstruction. Additional safety benefits come when car doors open; occupants of the vehicle can exit to the back of the vehicle toward the sidewalk and are shielded by the car doors instead of having to maneuver around them. This feature is especially beneficial for families with small children. Loading and unloading from the rear of a vehicle is also much easier with back-in parking as the trunk of the vehicle is facing the sidewalk.” 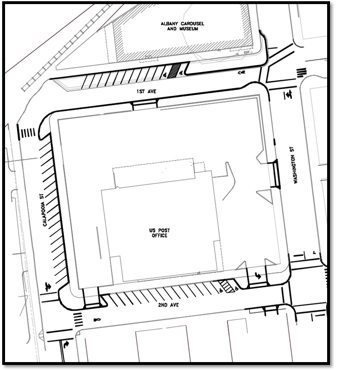 Note that most of the back-in spaces will be on the driver’s side on the one-way streets around the Albany PO.

That’s all fine. But only right-side angled parking offers better visibility. And on two of the three blocks where angled slots will be provided, they are on the left or driver’s side of the street.  This means that when the parking slot on your right is full and you pull out, you can see nothing of oncoming traffic until you’re in its lane. Even if the spot on your right is vacant, you can see traffic only if you twist your neck to look over your right shoulder, not that easy after a certain age.

From Sacramento to New York City, the online literature on angled parking is full of praises for the back-in kind. But there are cautions as well. Streetsblog.org shows this from one Todd Boulanger, who wrote seven years ago: “As a long time researcher (and photographer) and implementor of back-in diagonal (back-in oblique) parking, I have to add some suggestions … Try to avoid placing back-in angled parking on the driver’s side (left side in the U.S.) of a one-way street, as this layout reduces the ability of the driver to see oncoming traffic (and bicyclists) when pulling out.”

He also says there will be backlash from drivers, “especially the elderly who complain they cannot back into a space due to mobility issues…”  (Think of all those grandparents hoping to take their grandkids to the Albany Carousel.)

The new parking layout is part of Phase 1 of the city’s downtown streetscape project and is supposed to be finished in late March. It will yield 47 diagonal parking spaces on First, Calapooia and Second, each space 9 feet wide. That’s about 20 more spaces than now, and that will be helpful, especially when the Albany Carousel opens later in 2017. Phase 2, on several other downtown streets and not involving angled parking, will be done later in the year. Both phases together are expected to cost around $8 million.

When I reported on the back-in parking plan before, I suggested that Albany drivers start practicing. Where? Maybe in supermarket parking lots when nobody is around and you can drive against the painted arrows — to simulate left-side parking — without getting hit. (hh)

6 responses to “Back-in parking on the wrong side”