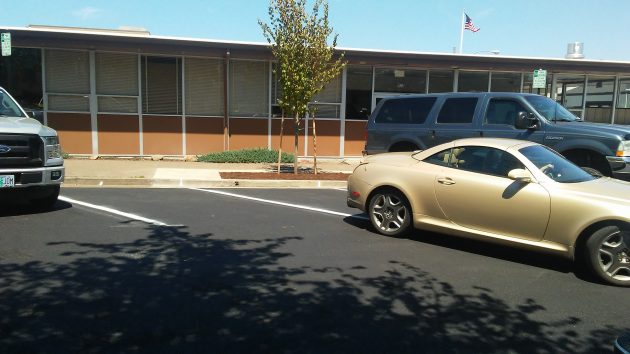 A driver tries the new parking layout in front of the Albany Post Office Tuesday.

So, if you’ve tried to back into the new parking layout outside the Albany Post Office, how did you like it? There was some initial reaction on social media, and I’d like to hear from people about how this worked for them.

The streets around the post office were rebuilt in the first phase of the downtown “streetscape” improvement project supported by CARA, the downtown urban renewal district. Striping for parking spaces on the post office blocks of First and Second avenues and Calapooia Street was laid down last week.

On First, the spaces are on the right-hand side of the one-way street and are still blocked by construction fencing at the Albany Carousel. But on Calapooia and Second, the new layout — a first for Albany in modern times — is on the left-hand side and available for use.

When I tried parking my compact car on Second in front of the post office after hours on Monday, all but one of the spaces were open and it took me two or three tries to get between two lines. In my truck the next day, it was the same. I found that it’s tough to properly aim the vehicle when you can’t see the lines behind you. And when cars are parked along the curb on the opposite side of the street, there’s not much room to maneuver.

City officials insist that according to traffic experts, back-in parking is great from a safety angle. If you have to get stuff out of your trunk, they say, you can do so standing on the sidewalk. And when you get ready to pull out, it’s easier to see that the street is clear of other traffic.

They may be right about safety once you’re parked. But it’s hard to hit a relatively narrow space backwards when you can’t really see it. So my guess is that people will avoid those spaces if they can find some other place to park. (hh) 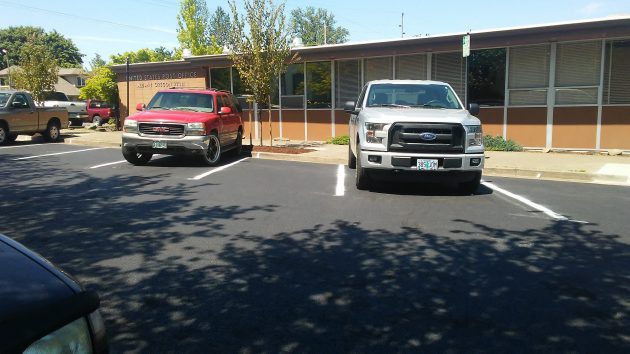 For pickup trucks, the angled spaces are a pretty tight fit.


23 responses to “Back-in parking: Your opinion?”