August sewer spill could get expensive 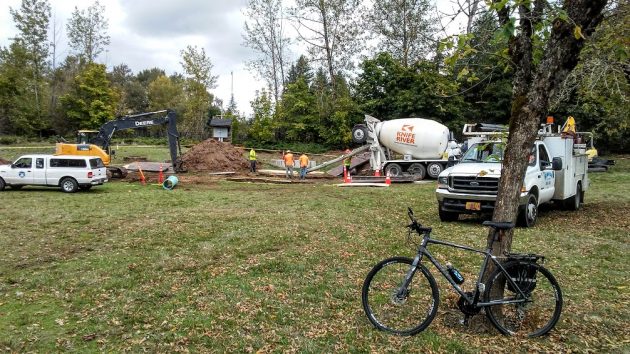 At Bowman Park, workers pour concrete on Sept. 20 near where a sewer pipe leaked into the Willamette River on Aug. 15.

A sewer leak last month may prove costly for Albany ratepayers unless the city and Willamette Riverkeeper can reach some kind of agreement.

The leak from an abandoned sewer pipe near Bowman Park was discovered on Aug. 15, the same day 185 boaters headed downstream from Albany in the annual Paddle Oregon event organized by the Riverkeeper, a nonprofit group created to be “the eyes, ears and voice” of the river.

The city estimated at the time that the pipe discharged about 2,100 gallons from 8 a.m. until 2 p.m., when it was plugged.

On Aug. 27, Travis Williams, executive director, notified Albany officials that after a 60-day waiting period, Willamette Riverkeeper intended to sue the city for violations of the federal Clean Water Act.

Besides the incident in August, Willamette Riverkeeper contends that emergency sewer overflows during heavy rainstorms since 2015 were not authorized by the city’s pollution discharge permit. It says that total penalties for the violations it alleges are more than $585,800, and it also intends to seek attorney costs and witness fees.

Last week, after I asked, Williams sent me a copy of the organization’s nine-page notice to the city.

“It was unfortunate,” he said in an email, “but we found some other irregularities in their operations that concern us. We are setting up a meeting with their legal counsel to address.”

He added, “The city is upset with us, yet utilizing the CWA [Clean Water Act] can help provide a specific path forward that is legally binding. At the very least we want to ensure that our PO participants, nor other swimmers and paddlers in that area don’t travel through sewage again when recreating on the Willamette.”

I asked City Manager Peter Troedsson for a response to the notice to sue.

“The City is committed to protecting and improving water quality in the Willamette River, and as you know we take our environmental stewardship responsibilities seriously,” he replied. “Since 2000, the City has invested more than $70 million to expand capacity, replace infrastructure and proactively maintain the community’s wastewater system.

“We strongly disagree with how our operation, management and maintenance of that system has been characterized in the Willamette Riverkeeper claim.”

For some time there’s been an excavation going on at Bowman Park, and last week they were pouring concrete there. I asked Chris Bailey, the director of public works operations, if that had anything to do with the abandoned pipe that caused all this.

“Yes,” she replied, “the contractor is locating some pipes in that area, both active and inactive, so that we better understand their layout and connections.”

On matters concerning the Clean Water Act, Albany is represented by the Portland law firm of Cable Huston LLP. What happens next will presumably depend, at least in part, on what they and Willamette Riverkeeper’s counsel can work out. (hh)


17 responses to “August sewer spill could get expensive”