August report: Too many apples 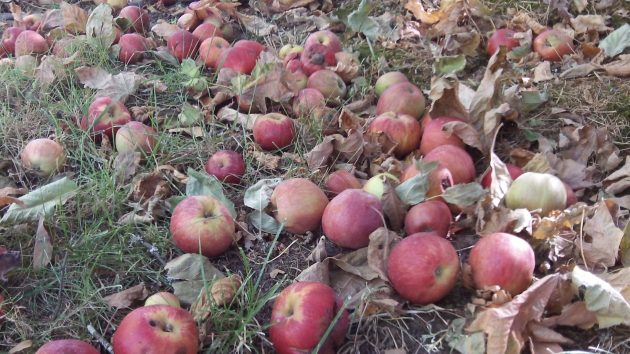 The problem with apple trees, as you may already know, is that they produce apples whether we want them to or not. And then, starting toward the latter part of August, they drop fruit all over the place.

Conscientious householders would now what to do about this. They would go online and find helpful answers, on Mother Earth News and elsewhere, to the question: What to do with windfall apples? Or if they’ve waited too long, what to do with rotten apples?

Apparently there are several things you can do, all of them sensible and frugal, with various nutritional benefits. They all take work, though, starting with cutting out the bruised sections on the outside and the wormy parts in the middle of each one. And in case most of the apples on the ground are already too far gone, about the only beneficial alternative is to add them to the compost heap.

Or you can gather them up by hand, one by one, and toss them in with the yard debris. And there, the benefit is about an hour of vigorous daily exercise — or more, depending on the size of the tree — a form of exercise whose only upside is that it is free because it requires no machines or mechanical device.

You’d think that in the wilds of the mid-valley some miles from town, there would be at least a few fruit-eating animals to reduce the load of windfall apples that has to be picked up. Evidently not, though, other than yellow jackets, and they don’t make enough of a dent despite their prodigious numbers. Too bad our multiplying deer don’t like fruit. They nibble at everything else in the yard, but apples on the ground they disdain. (hh)

8 responses to “August report: Too many apples”