At the truck eater, brighter warnings

Albany has started upgrading the signage that’s supposed to keep drivers of tall trucks from ramming their rigs into the Lafayette Street trestle on First Avenue. Brighter blinking lights are part of the work.

I was riding my bike west on First the other day when, for the first time, I noticed flashing warning lights on both sides of the driving lanes just past Hill Street, two blocks ahead of the trestle. Why didn’t I remember seeing those lights and big detour signs before? Had they always been there and I just didn’t notice? Or were they new?

A few weeks ago, city officials had announced they planned to take steps to try to prevent truck collisions at the trestle, which has a posted clearance of 11 feet 4 inches. Crashes have happened there many times over the years and seem to have become more frequent in recent times, even though detour signs for trucks are in place, along with a set of warning chains dangling above the street and slowly blinking lights on the railroad bridge itself.

As usual, I asked the people I was sure had the answers.

“The lights have been there for a long time but we added the orange diamonds.” City Manager Wes Hare replied. “I believe we relocated the signs so that they are more visible. We plan to install some new lights on the trestle as well. The railroad  is cooperating but not contributing.”

Ron Irish, the city’s expert on matters concerning streets and transportation, said that while the detour signs and flashing lights had been there all along, the lights were dim by current standards. “Our Street Department replaced the old lights with a new LED version, and added the orange flags over the top of the signs. Other changes in the works (been out sick for a few days so I’m not sure if they have happened yet or not) include moving the advance clearance warning signs to a location where they are more visible, and working with the railroad to change the flashing lights on the trestle itself. Those lights are also pretty dim, and the plan is to replace them with LED fixtures as well.”

Since I could not remember seeing them before and now I had, making the blinking lights on the street brighter was plainly a good move. One fewer excuse the next time a truck at the trestle goes crunch. (hh) 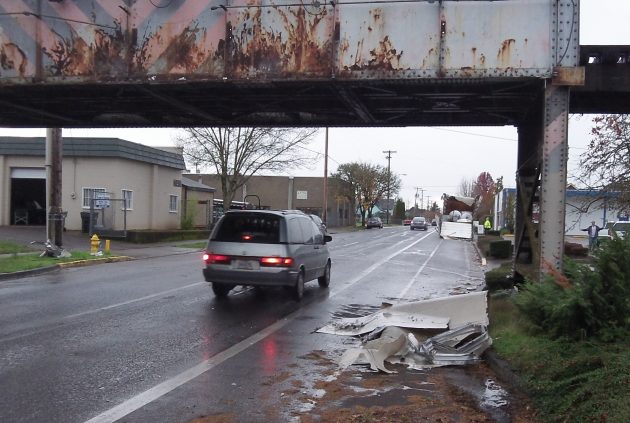 A file shot of the trestle after a crash in November 2014.

5 responses to “At the truck eater, brighter warnings”