At the old OER depot, envisioning the future 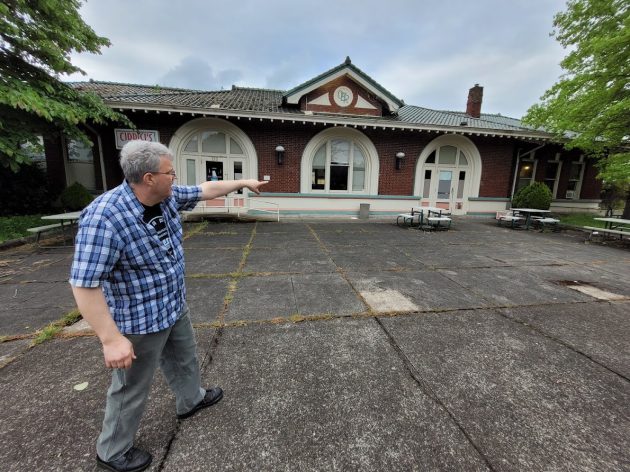 This, Matt Bennett says, will be an outdoor dining area when Sybaris operates in the old OER depot.

It’s hard to imagine now what the old Oregon Electric Railway depot in Albany will be like once it has been fully restored and Sybaris Bistro has moved in. But Matt Bennett can imagine it very well, and he explained his ideas to me this week.

Matt and Janel Bennett, owners of Sybaris, bought the historic railway depot at 133 Fifth Ave. S.E. and plan to move their restaurant there. But first the building, the main part of which dates from 1912, has to be remodeled and its historic aspects restored.

The place had housed Ciddici’s Pizza and video poker for close to 30 years. The heavy pizza oven is gone, but a lot of other stuff from the previous use is still waiting to be moved out.

Here’s the outline of what Bennett sees.

The former waiting room will be the main dining area. But there will also be outdoor dining on what was the original train platform along Fifth Avenue, and on a separate patio facing Lyon Street.

A separate room in the original building was an office during the early days and the video poker parlor in recent years. It will become a dining room that can be closed for meetings where confidentiality is desired.

The west side of the complex along Lyon Street is not part of the original depot. That’s where groups including newspaper employees from the nearby Democrat-Herald held pizza parties and other celebrations (including my farewell from the paper in 2012). This wing will become the Sybaris kitchen.

In the back of the building, where Ciddici’s made pizza, Bennett envisions a small bar designed for guests who just want to stop in for a snack and a drink.

To shield the outdoor dining area from traffic noise, Bennett is thinking of a hedge along the Lyon Street and Fifth Avenue sidewalks.

The main entrance to the restaurant will be the eastern arched door on Fifth. The main door to the pizza place, an easy connection between the future kitchen and outdoor tables, will be for servers.

Outside, near the corner of Fifth and Lyon, there’s an unpaved patch of green. Bennett, always the chef thinking of ingredients, sees an herb garden there.

This is the broad outline. All the details of what will have to be done to the building haven’t been fully explored. For example, the old depot has wooden gutters that will pose a restoration challenge.

Bennett says the gutters were one of the factors that got the project approved for a state historic restoration grant of $200,000. (On our walk around the building Sunday, we were both pretty sure that the Albany Landmarks Commission would not approve replacing the wooden gutters with vinyl.)

In May, Bennett and his architect, Bill Ryals, asked the Albany Revitalization Ageny (ARA) for an $800,000 loan from the CARA urban renewal program to help with the depot restoration.

The city council, which acts as the ARA, took no action then. But the matter may come up again when first the CARA advisory board and then the ARA/council meet starting at 5:15 p.m. Wednesday (June 15) at City Hall.

Regardless of financing, the transformation won’t happen overnight. Bennett has talked about Sybaris being open in the depot some time in 2023. (hh) 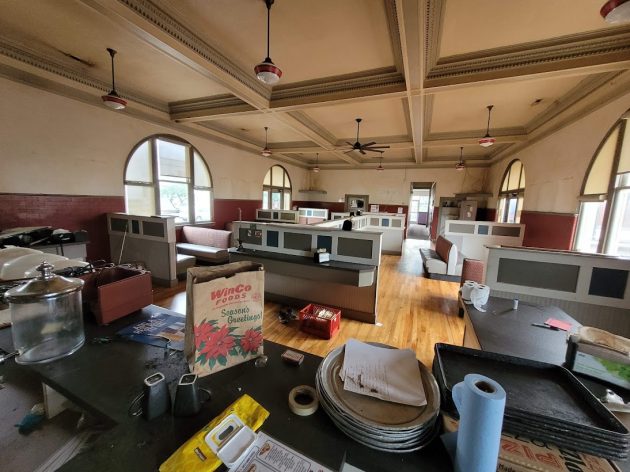 The waiting room of the former depot. Ciddici’s stuff has yet to be moved out.


13 responses to “At the old OER depot, envisioning the future”