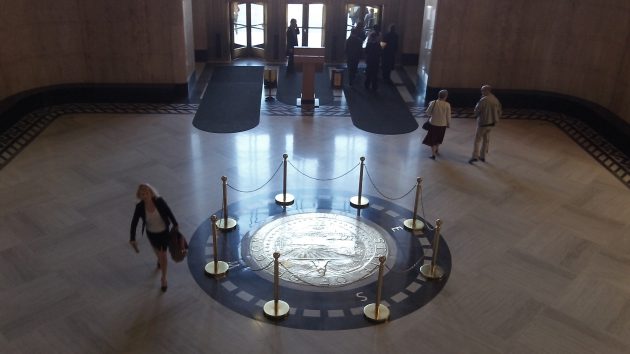 The revolving front doors of the Oregon Capitol have always been hard to turn but easy to enter unbothered by guards.

One of the traditions of life in Oregon is about to come to an end, and it’s another step in our long slide of giving up little bits of freedom in the name of “security.”

Anyone — from politicians and other big shots to little people like you and me — has always been able to walk into the Capitol in Salem without being bothered or questioned in any way. That is about to change.

Officials in the offices of the House speaker and the Senate president announced the change Wednesday. Starting Jan. 27, they said, “all visitors, employees, and elected officials will be required to pass through a metal detector upon entering the building.”

Further, “bags and other items” will be searched in person or passed through an X-ray machine. “Trained security personnel” at the doors will check for weapons and other “dangerous items.”

This, the legislative officials said, “will be similar to security practices at county courthouses throughout the state.” Not all of them, though. Linn County, for one, still respects free citizens enough not to subject them to the indignity of forcing them through a detector and scanning their belongings just to attend a meeting or see about their taxes.

The leadership at the Capitol is taking those steps, the officials said, “in order to better ensure the safety of the public, staff, and elected officials.”

A Capitol building that’s open to the public and freely accessible to anyone is a symbol of a free people, maybe not the most important symbol, but still a significant one.

Leaders in Salem diminished the spirit of openness when they barred the public from the building during the last session on the grounds of the Covid contagion. Now, in a different but more lasting way, they are damaging it again. (hh)


14 responses to “At the Capitol: More security, less freedom”