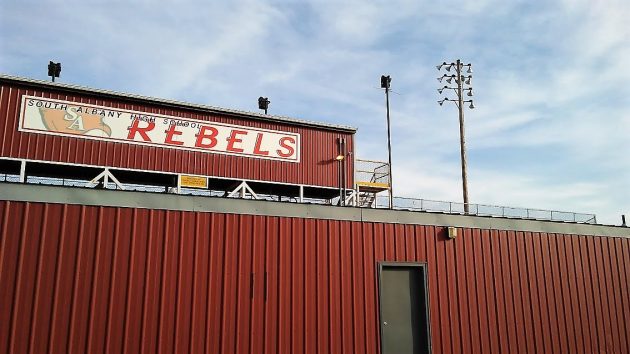 The press box at the Rebels’ football field, from the back, photographed in January 2017.

I don’t envy whoever has to come up with a new name for the South Albany High School teams in various sports.

As you know, the school has decided to abandon the Rebels label because of its baggage relating to the Confederacy. The students will get a chance to take part in whatever process is set up to come up with a replacement. It won’t be an easy job.

You’d think that geography might offer possible names. South’s attendance area encompasses many natural and man-made features to inspire those charged with the task.

One presumably safe alternative is to pick an animal, like one of those common in the vast fields southeast of town.

But Eagles might be judged imperialistic in this hypersensitive age, and Sheep would be bad for teams that hope to win. Rams? Too gender-specific, no doubt. Nutria are common along the Albany-Santiam Canal, which runs through South territory. But Fighting Nutria is not likely to be anyone’s first choice.

The South attendance zone is home to most if not all the area’s biggest retailers, from Fred Meyer to Walmart. So how about the South Shoppers?

The former Southern Pacific and now Union Pacific main line forms the school zone’s western line. The teams could name themselves the Union Pacers or, harking back to history, simply the South Pacific.

Selmet, the growing manufacturer east of I-5, is an expert in titanium castings. South teams could honor that expertise within their zone by calling themselves the Titaniums or Titans for short.

The Freeway Lakes are not far away. But Lakers is not original enough.

Remember the school is on Columbus Street. That is one connection that is probably useless. Even if Columbus was still revered, the South Albany Columbians would not sound quite right.

The kids at South will come up with something that will be, no doubt, far more appropriate and original than any of these. (hh)


20 responses to “At South, a tricky naming task awaits”