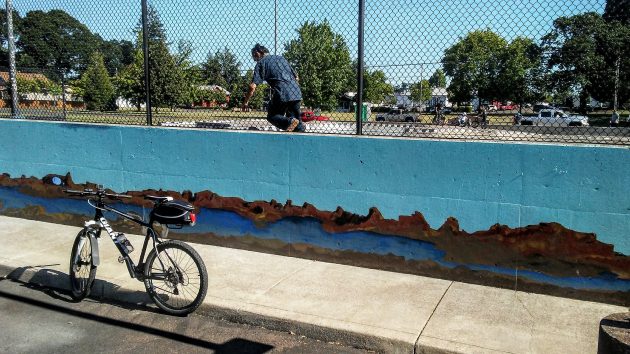 Oblivious of the mural below him outside the fence, a skateboarder starts another run last Friday evening.

A reader asked if I had seen the mural at the Albany Skatepark. I had not, but a bike ride last Friday took me past there. And now I have.

The painting extends along the outside of the entire 90-foot-long concrete wall on the north side of the skatepark. Passersby can see it across the vacant lot from Santiam Road. Or they can, of course, walk across the grass and take a closer look.

There is not much to see, though, as far as details are concerned.

The artist’s idea appears to be a rugged coastline along a very long and narrow bay, with nothing but blue sky above. Or maybe it’s supposed to be a long lake lined by a sawtooth-like ridge of rocky cliffs.

I tried to find out who did this when, and particularly why. But I struck out.

People I asked in the parks department had no information about this particular project. It may have been intended at least partly to discourage graffiti on that wall. If you happen to know who gets the credit, please let me know in the comments below.

During the few minutes it took me to look at the mural and take a few photos that afternoon, I witnessed some impressive feats performed by people inside the park. They were doing various aerial acrobatics, achieving remarkable heights and landing smoothly, upright on their tires or their boards.

Me, I just climbed back on my bike and sedately rode away. (hh)


6 responses to “At skatepark, mural now covers a concrete wall”