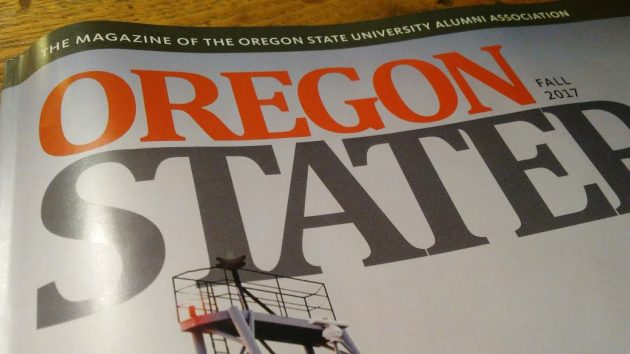 The current issue of OSU’s alumni magazine, in which President Ed Ray explains why he is considering renaming four buildings on the Corvallis campus.

As you may have heard, Oregon State University is trying to decide whether to change the names of four campus buildings because of the opinions or actions of their long-dead namesakes. The reason for change, we now hear, is that the names may keep minority students from doing well.

In the latest edition of Oregon Stater, a magazine for alumni, OSU President Ed Ray explains his view that considering the names is more than an exercise in faddish political correctness. He sees it as one step to help reduce the “achievement gap between students of color and the student body as a whole.”

He doesn’t say what the gap is. He does say: “We’re still making very little progress in moving toward our goals of a 90 percent first-year retention rate and a 70 percent graduation rate for all students. … We must keep asking ourselves: What are all the things we can do if we’re serious about moving those numbers, about helping our students be successful?”

The buildings at issue are Avery Lodge, Arnold Dining Center, Benton Hall and Gill Coliseum. Now it may be that a few OSU freshmen actually know who Avery, Arnold, Benton and Gill were. But would they really care enough to let it affect their studies or their grades?

Avery was one of the founders of Corvallis now being criticized because of the pro-Southern views of his long-forgotten newspaper, “Occidental Messenger.” Arnold served as an enlisted man in the Army of Northern Virginia commanded by Robert E. Lee. U.S. Senator Benton pushed America’s expansion into the West. And “Slats” Gill, of course, was the basketball coach from 1928 until the 60s who, some are now claiming, resisted integration of his basketball teams.

You can find the details on all this here. It’s a website OSU set up on the naming issue.

Ray says he plans to make his decision on the names in November. But you have to wonder: If “Gill” goes, can “Coliseum” survive scrutinity for conformance to OSU’s goal of “advancing inclusivity”? After all, it’s named after the Colosseum, the famous arena where slaves were forced to fight as gladiators while the emperors watched and the Romans cheered. (hh)