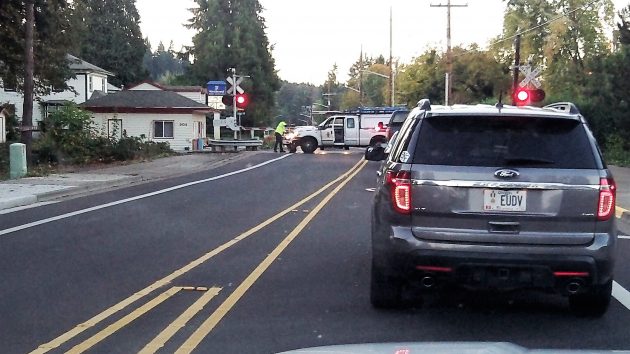 A railroad man works to get his truck aligned on the Portland & Western track Monday evening.

For 39 years I’ve crossed the railroad tracks on North Albany Road just about twice every day. In yet on Monday I and maybe a couple dozen other motorists were treated to a sight that was novel at least for me.

The crossing arms came down. But it wasn’t for a freight or for any other kind of train. The arms came down, the blinking lights came on, and the warning bell was clanging so that a railroad maintenance guy could get his truck properly situated on the track before lowering the auxiliary wheels that transform the truck into a vehicle that runs on rails.

He did this carefully and as expeditiously as he could. But evidently something didn’t go right the first time. After lowering the back wheels and then the front, and shifting his truck back and forth, he had to raise the front pair again and try to get them aligned once more.

And all this under the watchful scrutiny of drivers on both sides of the lowered crossing arms. The guy did the best he could, being on his own and without a helper to give him signals. So he had to go back and forth a time or two. It took him only a couple of minutes or so, but you know how it goes when you’re in a hurry and somebody is holding you up. It always seems longer than it is.

(I was coming from a two-hour Albany City Council meeting where the topic, for the umpteenth time, was the rain tax the council plans to enact before the planned March 1 effective date. But more about that another time.)

His iron wheels properly seated on the rails with the truck pointed west, this guy raised the crossing arms and we all went on our way, having seen a maneuver that is apparently routine but I had never seen before. (hh)


9 responses to “At N. Albany RR track, a novel sight”