At Edgewater Village, a plan change 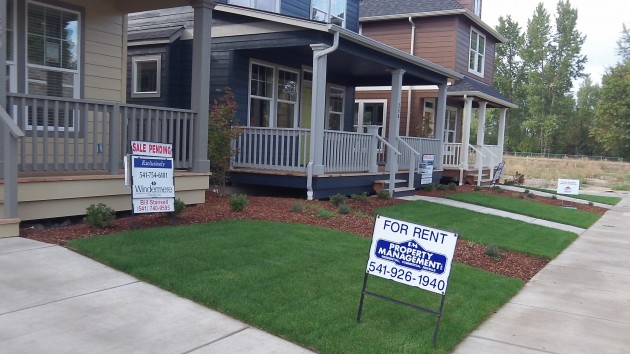 Three of the Edgewater units on Main Street near the Willamette River a few weeks ago.

The market is forcing a change in the plans for Edgewater Village, the most ambitious of all the downtown development projects supported by CARA, the Central Albany Revitalization Area.

Developers George and Paula Diamond, of Lake Owego, told the CARA Advisory Board Wednesday they’ve not been able to sell the first five houses built in the planned unit development near the Willamette riverfront on Main Street. Now they’d like to scrap the original plan for 55 additional houses on the six-acre site and build multiple-family housing — apartments — instead.

The CARA board after prolonged discussion, voted that yes, it would consider the change in plans, which the “mixed-use” zoning there would allow. Details, such as a site plan, are to be worked out by the developers in conjunction with the city staff. George Crandall, the Portland architect advising CARA on design matters, will be consulted.

The Diamonds said they’d spent $2.1 million on the project so far, but the market has changed and the kind of houses they would have liked to build on the site are no longer economically feasible. (Or words to that effect; some of the exact phrasing escaped me because nobody at CARA meetings makes any great effort to speak distinctly or to talk directly into the microphones provided in the city council meeting room.)

The five Edgewater houses, two stories each sitting cheek-by-jowl on narrow lots on the west side of the northern stub of Main Street, were finished in August. They remain unsold, though one or two appear to have been rented. They had been priced from nearly $256,000 for the smallest, at 1,546 square feet.

George Diamond also asked that the city sell him at the appraised price a parcel near the center of the Edgewater parcel, adjacent to the BNSF Railway track. Albany acquired the lot from the railroad a few years ago as part of negotiations over a new city franchise for the track, which runs partly on Water Avenue.

CARA has invested $2.4 million in what promised to be a multimillion-dollar development. The public-private partnership deal was structured as a loan that would be forgiven at the rate of $40,000 for every house built. The houses were supposed to be finished in stages through August 2018. Diamond said apartments would result in a tax-value increase bigger than if houses were built — once the project is done. (hh)


10 responses to “At Edgewater Village, a plan change”