At Bryant Park, before tonight’s rush for treats

Here we see Kim Lyddane, the Albany parks and recreation director, getting ready to direct traffic at the entrance to Bryant Park a little before 3 this Saturday afternoon.

The occasion? The parks department’s solution to children’s trick or treating on a Halloween disrupted by the Covid pandemic.

From 4 to 6 p.m. today, the city had invited parents to drive their kids through Bryant Park in order to receive treats. This looked like a popular event as the signups reached capacity shortly after the city announced it on social media.

Some 1,450 children had been signed up, City Manager Peter Troedsson told the city council Friday in his weekly summary of noteworthy items.

Bryant was closed to the general public for the event. When I passed by the park this afternoon and ran into Lyddane, in her Halloween costume, she had her hands full directing cars that appeared to be arriving early for the event, or maybe just wanted to visit the park. (hh) 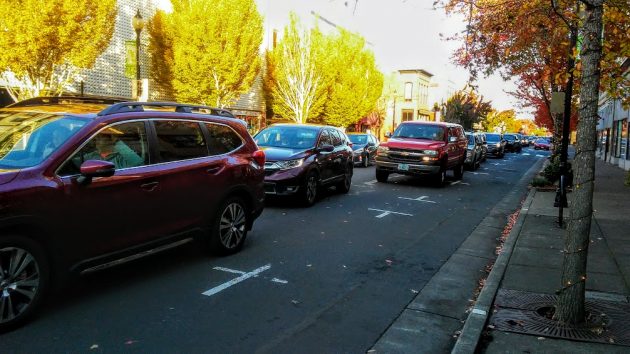 By later Saturday afternoon, traffic headed for the park was backed up on First Avenue downtown, shown here; Lyon Street, and even the Pacific Boulevard off-ramp.

2 responses to “At Bryant Park, before tonight’s rush for treats”