At 4th and Calapooia, a few more weeks…

Written May 12th, 2022 by Hasso Hering
Comments: one response. 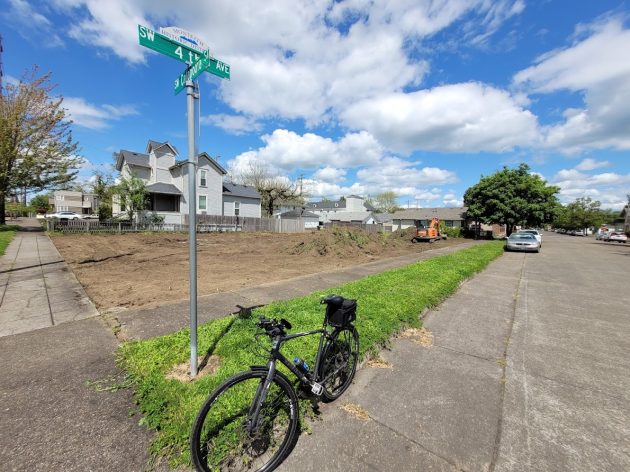 On May 10, the lot at Fourth and Calapooia had been cleared of weeds.

This week it looked like the long-contested redevelopment of this downtown Albany corner could finally begin. But not quite yet.

The property at the northeast corner of Fourth and Calapooia had been cleared of grass and weeds when I went by on Tuesday and stopped to take the photo above.

It’s where Albany builders Mark and Tina Siegner have plans to construct two three-story buildings with commercial space on the ground floor and a total of eight apartments on floors 2 and 3. They call it Calapooia Commons.

Their architect, Bill Ryals, told me construction would begin “as soon as I can get the drawings turned in.” He meant as soon as he could file for a new building permit. A permit being shown on the city’s website dates from 2020 and is still listed as pending.

Last month the city’s Planning Division approved a site plan for the project. The 10-day appeals period expired without an appeal being filed.

The Siegners are anxious to get started and hope they will have a permit within a month or six weeks, Mark told me Wednesday. Neighbors have noted the ground being cleared and shown a lot of interest, as you would expect.

The story of the Siegner’s interest in the site goes back to 2018, when they bought the property, which then contained three historic but severely dilapidated two-story houses the city had condemned as uninhabitable.

Their request for urban renewal financing to help with restoring the houses was rejected by the city, and a series of controversies ensued, first about demolishing the three houses and then about building the mixed-use buildings in their stead, as the zoning provides.

The story has been followed in this blog, and the latest summary appeared a month ago here. A few more weeks, and construction is likely to start. (hh)


One response to “At 4th and Calapooia, a few more weeks…”