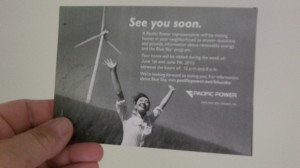 The lady on the postcard looks delighted.

Pacific Power is sending representatives into Oregon neighborhoods to answer questions about renewable energy and its Blue Sky marketing program. The company is sending people postcards announcing the time periods for these visits. On the postcards, a young woman looks very happy while in the background, there’s a wind turbine of the kind providing some of this green energy.

Here’s one of the questions we might ask when the power company comes around: Did you see that Associated Press report on May 14 about windmills killing lots and lots of wild birds?

This is no small thing, no mere mishap that happens rarely or just now and then. The AP reported that around 573,000 birds are killed on American wind farms each year, according to one estimate published in March by the Wildlife Society Bulletin. The total includes around 83,000 hunting birds like hawks, falcons and eagles.

And guess what: The AP found that the Obama administration has turned a blind eye to this slaughter in the sky, even though under federal law eagles and some of the other species are supposed to be protected.

Yes, getting power from the wind is supposed to be a good thing, no matter how many views of the horizon in remote parts of the country are ruined by rotating blades. But don’t let them fool you. That windmill power comes with a fearsome cost, in addition to what it says on the bill. (hh)

Rhea Graham responded via Facebook: I really have a hard time buying the idea that birds run into those. How many birds are killed a year on the freeways?  Not many!  Birds get out of the way… I have a feeling this is the coal/petroleum/power companies, myself.

Rich Kellum responded on June 3:  Oil companies??? Really? How did they know how many? Maybe the dead birds at the base of the wind generators, ya think?